Torchwood Soho: Ashenden returns us to the world of 1950s Torchwood, the province of Samuel Barnett’s devious agent Norton Folgate.

As before, the story begins with Cardiff’s finest everyman, Sgt. Andy Davidson (Tom Price). Pulled back to the past, he knows he is due another encounter with Norton Folgate (Samuel Barnett). It also reunites us with Gideon Lyme (Joe Shire) and the delightfully acerbic Lizabeth Hayhoe (Dervla Kirwan); impressive, as the former died at the end of Parasite!

Once again, the story plays out across six shorter parts, consciously aping the structure of a Quatermass serial. 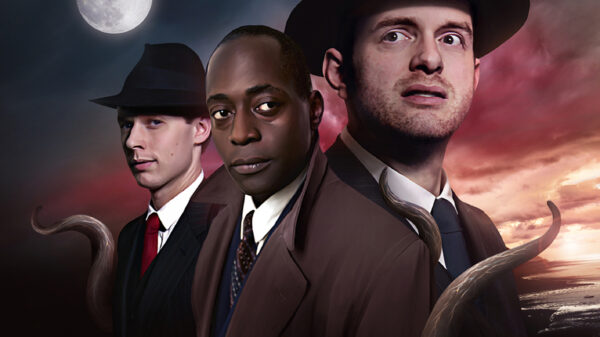 When Andy discovers he has a temporal passport to Pimlico, he finds a London quite changed from his previous visit. He’s not alone in the Pimlico Relocation Zone though, as the late Lizbeth Hayhoe, formerly of Torchwood’s Room 13, finds herself transported there too.

Brought before the Torchwood grandees, the pair are tasked with bringing in the man who has sold the organization out: Norton Folgate. By way of an incredibly grim boarding house, it is soon clear that all roads, or rails, lead to Ashenden – a rather strange New Town on the south coast of England.

Writer James Goss ably mixes the bizarre and the grotesque; from commuters with briefcases full of sand, piles of bodies and ever-increasing needles, the imagery isn’t one for the faint-hearted. It could put you off picnics for life too! The sense of unease is bolstered by Peter Doggart’s sound design and Blair Mowat’s score.

Goss also plays with the timeframe too as episode 4, Rivers of Blood, reveals how the situation came about with a damning but all too believable backstory.

Across the set, all four principals are well employed. While Andy blunders into trouble, he persists against seemingly implacable odds. James Goss has a talent for pairing odd couples; there is a lovely dynamic between the sarcastic Lizbeth and the amiable Andy, whom she promptly christens idiot. We are so glad that Dervla Kriwan’s character was revived as she brings a sharp-witted practically to the tale.

For Norton and Gideon, who we left at start of a burgeoning relationship in Parasite, time has clearly passed; their difficulties are addressed as the story plays out, especially in the light of Gideon’s new role at Ashenden. In the wider guest cast, Laura Riseborough (Cicero) particularly shines as Miss Satterthwaite.

This is another great Torchwood tale which benefits from the longer episodic format. There is plenty of satire in this darkly comic tale which plays with our expectations; we puzzle out Norton’s motivations throughout, as do the other characters. It is monstrous at times too, reminding us that as much as the aliens pose a threat, ambitious politicians and faceless government departments are truly the ones to fear!

With its period setting, rich characters and thought-provoking themes, this might well be the most interesting iteration of Torchwood yet.

Torchwood Soho: Ashenden is available on CD and download from Big Finish.