Technically Lucifer season 6 arrives on Netflix on September 10, and it’s only August 8, but as the Devil (aka God) says Don’t overthink it. We’ve pulled together gossip and part-informed speculation from a number of places, some are even facts. Let’s do this!

Actually a fact (or at least published as one on Neural Cluster) or even a set of facts, is the episode lengths:

We added the episode titles; the lengths were gathered by Lev an uber-fan on Twitter (@neuralcluster) who has early access copies of season 6, so is worth following for tidbits. The ninth episode is exceptionally long, so expect something very poignant. Some fans are still predicting the demise of Chloe, yet the we are promised a satisfying ending in Partners ‘Til the End.

It looks like we missed a couple of pictures (thanks to PopCulture), and the one used for this feature (see top) is called ‘Mystery Man’, and is reported as from episode 5, The Murder of Lucifer Morningstar) — we’re none the wiser. 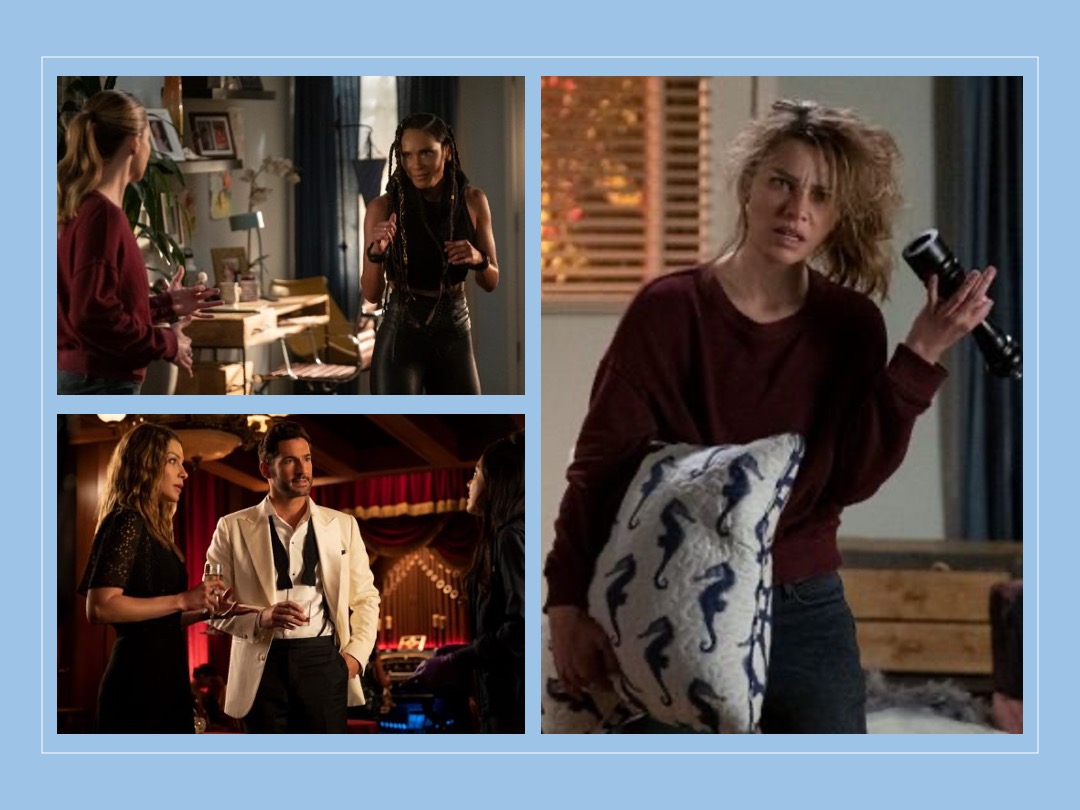 We’ve also located a few more, and collaged them (above). We’ve called them Chloe and Maze face-off, Chloe, Lucifer and Ella working together, and Chloe’s Bad Hair Day. We think that’s most of the official images now, let us know what we’ve missed.

The top-left Chloe picture in the montage has been taken in some quarters to imply she has become a bounty-hunter as Maze is now ruling Hell. We aren’t completely convinced, but could see a role as a Celestial bounty-hunter, chasing down various entities seeking to exploit the change of rules with Lucifer taking over his Dad’s job, or perhaps more demons from Hell or even an angel plot on Earth.

The other rumour (apart from the are they engaged or not debate) concerns [spoiler] Chloe being killed by the Tree of Life, and her resurrection by Lucifer meaning she has become immortal. It’s a neat way to have her not age like Lucifer himself, but how would she feel about Trixie still being mortal? There’s also a theory it means she can now bear Lucifer’s child. We do know she’s left the LAPD, and believe whatever she does next puts her in the centre of season 6.

When September 10 was revealed as the launch date, the video with it showed Lucifer in a white tuxedo, reprising the opening scene of Pilot, the very first episode, and telling the same traffic cop this was his last time in LA.

According to a report from Cinema Blend, there’s also a return for the first ever bad guy (last seen bashing his head against a wall) Jimmy Barnes. Is he unresolved business, or is there a twist? Does Chloe get to revisit other loose ends? The death of Uriel might have more mileage, for example.

We’ll wrap here, and keep you posted of more hints for season 6, and we expect at least one trailer.