Our favorite study group is back at Greendale Community College on Monday 2 July when Sony Pictures Home Entertainment releases the fifth season of Community on DVD.

> Take a look at our list of the Top 5 episodes of Community.

To celebrate the release, we’ve got sets of Community t-shirts and Season 5 on DVD to give away to three of our Twitter followers!

Follow @CultBoxTV and RT for a chance to win 3 x sets of Community t-shirts and Season 5 boxsets: http://bit.ly/1p7gxhS #CommCB 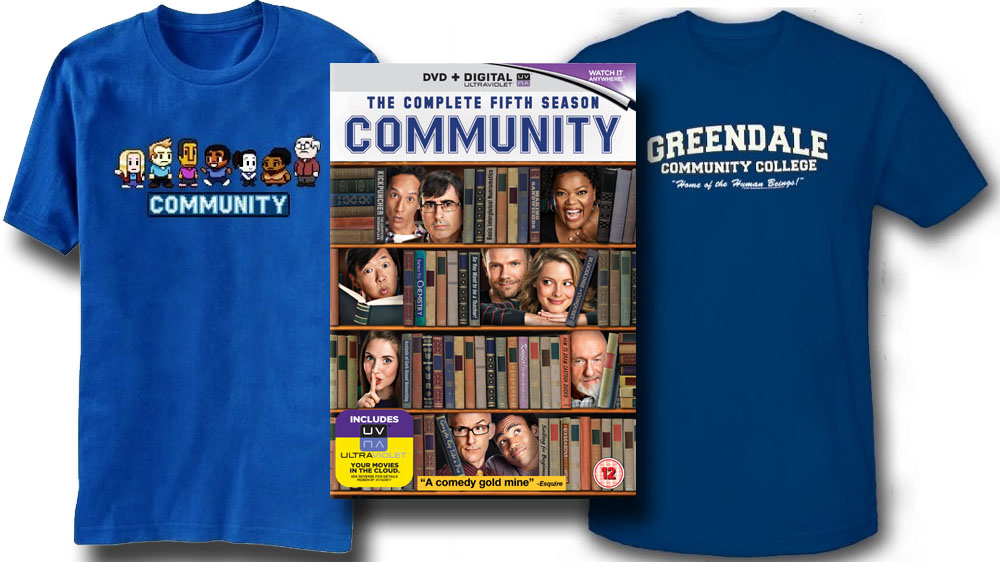 The boxset contains all 13 episodes, featuring cast and crew commentary on every episode, outtakes, and two all-new, behind-the-scenes featurettes. “Re-Animating the ‘80s” gives an inside look at the team behind the animation of “G.I. Jeff” and the process of developing the look, script and characters. “Advanced Television Production: 5 Days, 2 Scripts, No Sleep” is a 42 minute in-depth and intimate look into the writers’ room with creator Dan Harmon.  The featurette documents Harmon as he writes two episodes in a very short amount of time, while managing his other duties as Showrunner, from attending rehearsals and reshoots to meeting with the crew on upcoming productions issues.

America’s smartest, edgiest comedy goes back to school with a vengeance! Just when you thought you’d seen and laughed at everything, along comes Season 5 to reinvent all the rules. “Bear Down” for the most jaw-dropping, polygraph-taking, hot lava-walking, ass-crack-bandit-pursuing, fantasy-roleplay-gaming, animated “G.I. Jeff”-hallucinating, hidden treasure-hunting, college campus-saving season that gets a rating of five MeowMeowBeenz!

This competition has closed. The winners are Robert Cousins from Sheffield, Kat Eves and East Sussex and Hannah Lord from Sevenoaks.