In a change from rubbing shoulders with political figures like Winston Churchill and Richard Nixon, this week’s episode of Doctor Who, ‘Extremis’, sees the Time Lord recruited by none other than the Pope.

While Doctor Who generally has little time for religion – although the Third Doctor famously took some inspiration from Buddhist teachings – it does occasionally feature men (and women) of the cloth. Remember as well that the Eleventh Doctor even spent some time in a monk’s cassock himself while contemplating the mystery of the “Impossible Girl”.

5. Reverend Golightly from ‘The Unicorn and the Wasp’

A man of the cloth with a surprising past, the Reverend Arnold Golightly was a guest at Eddison Manor alongside the famous mystery novelist Agatha Christie.

Played by Tom Goodman-Hill, Golightly was revealed to be the half-human son of Lady Eddison and a visiting alien Vesipform – that’s a giant wasp to you and me – whose alien heritage had only recently begun to assert itself. Responsible for all the murders at Eddison Manor, and with his true identity revealed by the Tenth Doctor and Agatha Christie, poor Arnold ended up drowning in the Silent Pool. Here’s a clip, with bonus Felicity Jones as Robina Redmond and Felicity Kendall as the unhappy parent.

4. Tasha Lem, Mother Superious of the Church of the Papal Mainframe from ‘The Time of the Doctor’

Although we met other members of the church earlier in his tenure, our first encounter with the leader of the Church of the Papal Mainframe was in the Eleventh Doctor’s final story.

In charge of the space church, in truth a giant floating spaceship with its own weaponry and military forces, Tasha Lem instituted a blockade around the planet of Trenzalore in order to prevent the re-igniting of the Time War.

Outwardly humanoid, though she did not seem to age (she was against it), the feisty Tasha (Orla Brady) seemed to indicate a romantic past for her and the Doctor and was adept at flying the TARDIS too. Converted into a Dalek puppet, her strength of personality allowed her to resist their programming and she turned on her masters, rallying the Church’s forces against them in the final battle on Trenzalore.

3. Reverend Wainwright from ‘The Curse of Fenric’

When the Seventh Doctor and Ace visited Northumberland towards the end of WWII, one of the pawns in the Time Lord’s game with the eternal Fenric was Reverend Wainwright, the vicar of St Judd’s Church. A troubled man, suffering a crisis of faith about the war, Wainwright was easy prey for the vampires.

Another example of producer John Nathan-Turner’s celebrity casting instincts, but in this case a rather brilliant one, Nicholas Parsons was best known at that point for hosting the game show ‘Sale of the Century’ – although he had enjoyed a prolific film and television career since the 1940s. He also recently starred in Big Finish’s audio revival of Terrahawks as Nickel-plate Starsons, Zelda’s sadistic ex-husband.

2. Father Octavian from ’The Time of Angels’ / ‘Flesh and Stone’

Octavian was a Bishop Second Class and leader of the division of twenty military clerics who attended the crash of the Byzantium on Alfalfa Metraxis. On a covert mission to neutralise a Weeping Angel, Octavian had the criminal River Song released into his care and she brought “the equivalent of an army” to the cause, in the form of a very fresh the Eleventh Doctor.

Played by Iain Glen, not long before his now famous role as Ser Jorah Mormont in Game of Thrones, Octavian was a no-nonsense leader who added plenty of dramatic weight to the tense climb through the maze of the dead. Protecting the time lines, though he did not reveal River’s crime, he did give the Doctor an ominous warning before he was killed by an angel.

1. The Abbot of Amboise from ‘The Massacre of St. Bartholomew’s Eve’

In the first instance of a doppelganger for the Doctor, (as we are ignoring the Dalek’s robot Doctor from ‘The Chase’), William Hartnell was able to stretch his acting muscles playing the sinister Abbot of Amboise – a merciless zealot conducting a witch-hunt against the Huguenots in 16th Century France.

A pure-historical, with no science fiction elements, the story saw the Doctor and Steven Taylor arrive in Paris, 1572 and become  in events with the latter mistaking the Abbot for the Doctor in disguise.

Sadly, none of the episodes of “The Massacre” remain in the BBC archive thanks to the near-sighted policies of the 1970s, and there are no tele-snaps either, but thankfully fan audio recordings have preserved the soundtrack story for posterity. 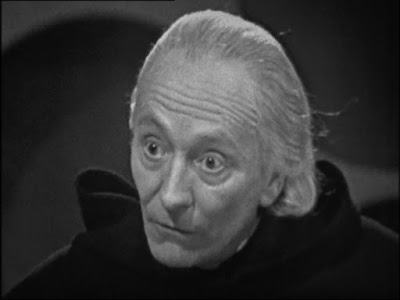