It’s 50 years since the release of Sean Connery’s fourth appearance as James Bond in 1965’s Thunderball!

A Vulcan bomber has gone off radar with a couple of nuclear bombs on board. Oops. To make matters worse, a man with a cat and his eye-patched pal want a lot of dosh for their safe return, or its boom time in the Bahamas. 007 needs his wits about him to track down the bad guys. Can the beautiful sister of the Vulcan’s pilot be the crucial lead he needs?

We still see little more of Blofeld than a pair of trousers, though there’s no doubt he’s boss. Meanwhile, SPECTRE’s Emilio Largo (Adolfo Celi) kicks serious ass with his white hair and eye patch, and ability to look coolly menacing even when casually rounding on a Parisian parking attendant or shooting clay pigeons by a pool full of sharks in a dress shirt.

He’s matched by the beautiful, deadly and pouting assassin Fiona Volpe (Luciana Paluzzi), a girl on a motorbike deadlier than Marianne Faithful. I mean, Fi has missiles on her bike.

Claudine Auger’s Domino is kittenish and vulnerable but brave and vengeful. She might like to play the victim but summons up the balls to spear her guardian/reluctant lover when the chips are down – and saves Bond from certain death. Domino might seem insubstantial compared with predecessors Tatiana and Pussy, but is far more complex.

Thunderball’s other main girl, Paula (a returning Martine Beswick, previously seen as a gypsy girl in From Russia with Love), does little other than get killed whilst Molly Peters’ masseuse is a likeable distraction.

Bond gets on the stretching rack at Shrublands and gets truly shaken and stirred; he’s pursued by Fiona and her lackeys at the Junkanoo; Bond and Largo’s face-off in the casino which later gets more physical on the Disco Volante; the implied punishment Largo dishes out to Domino with a cigar and some ice cubes; and the belting pre-credits sequence, complete with cross-dressing killer and jetpack.

» Raquel Welch, Julie Christie and Faye Dunaway were all considered for the role of Domino.

» The character of Fiona Volpe was originally to be Irish and named Fiona Kelly.

» Bond: “My dear girl, don’t flatter yourself. What I did this evening was for Queen and country. You don’t think it gave me any pleasure, do you?”
Fiona: “But of course, I forgot your ego, Mr. Bond. James Bond, the one where he has to make love to a woman, and she starts to hear heavenly choirs singing. She repents, and turns to the side of right and virtue… but not this one!”

» Blofeld: “SPECTRE is a dedicated fraternity whose strength lies in the absolute integrity of its members.”

» Bond: “Do you mind if my friend sits this one out? She’s just dead.” 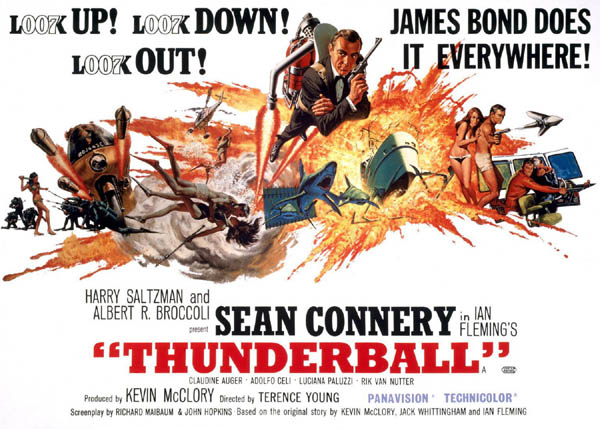 It was once commented that if Goldfinger represented the highpoint of the Bond series, then 1965’s Thunderball marked the start of the decline. Whilst not quite true, Thunderball certainly struggles a little compared to its precursors.

It’s overlong, and several key sequences – Bond’s trip to Shrublands, the search for the lost bomber and the underwater battle towards the end – are needlessly slow in pace. On the plus side, there’s a certain style and sense of ‘60s cool lacking from some of the other Bond films of the period.

John Barry delivers one of his most moody and evocative Bond scores and there are great touches like the briefing room of other 00 agents and the scientist who pops up to help save the day at the end. Ultimately Thunderball is flawed but always watchable, as long as you steel yourself beforehand in anticipation of the lulls.

What’s your favourite moment in Thunderball? Let us know below…