Woah. We’re halfway there. Woah. Caught me unawares. Reduced episode count but we’ll make it I swear. Woah. Ending on a prayer. 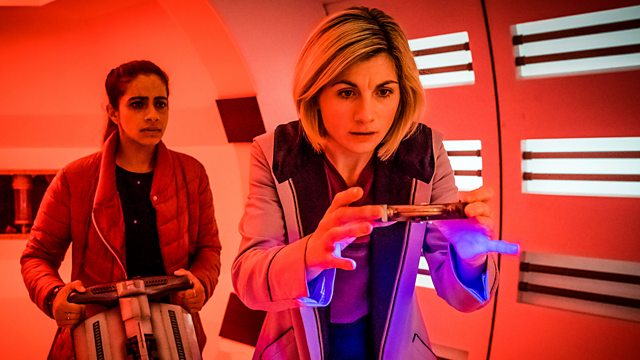 Press 1 if you felt the conundrum aspect of this episode was overemphasised.

Press 2 if you noticed Chibnall’s cunning trick of distracting us from this week’s implant device by using a word that sounded a bit like ‘condom’.

Press 3 if, when Jodie Whittaker was cast, you weren’t expecting her high points to include a speech about how rad anti-matter is.

Press 4 if you can’t wait for the Pting toys to be heavily discounted at Forbidden Planet next summer.

Press 5 if you have never related to a Doctor Who monster so strongly.

Press 6 if you’re really enjoying how Thirteen’s character is basically ‘Ten, but not a dick when people call her out on stuff’.

Press 7 if you won this week’s game of ‘Whose go is it to be Nyssa?’ by playing your combo of ‘Yaz’ and ‘Firing a phaser in a way that would be out of character if she had more character by now’.

Press 8 if you your headcanon is that the Scottish ship from The Beast Below made it into space and thus the Glaswegian accent was preserved forever across numerous species.

Press 9 if you reckon the Daily Mail readers – losing their rag over a man giving birth on the BBC – are going to lose their minds when they find out about Red Dwarf.

Gleefully mash the * button if you spotted this week’s subtle reminder that Chris Chibnall has huge sacks of teeth in his basement and they almost certainly belong to former writers of the show. We can only speculate as to his purpose. Anyway, it was definitely in there.

Furiously mash the # button if you’ve had a baby and can only dream of giving birth with that little fuss.