The hit Channel 4 comedy is coming back for its final run.

Not that long after the news that the final season of Derry Girls is imminent, Channel 4 have named the date. They’ve also dropped a ‘first look’ clip from the show too.

Set in a video store (remember those?) there’s a fun discussion regarding the Scottish “drag queen” William Wallace in Braveheart and an appearance from the ever-welcoming Dennis (Paul Mallon).

Reading coverage of the Bridgerton press conference however, it appears there won’t be as much of Clare in the show as before. Her role had to be cut down due to her commitments to Bridgerton. 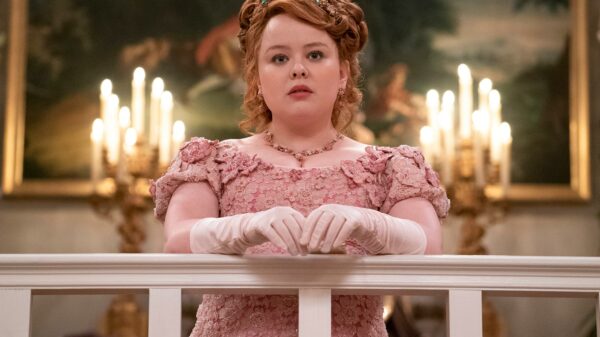 “It was devastating to me because I wanted to be in all of this. But compromises had to be made. And you know, they had to cut down my role somewhat, which was hard. Really, really hard. But I think, you know, the fans of the show are going to be happy. I think it’s a really nice sign-off for the show.”

After a very long wait, Channel 4 have gifted us a trailer for the third and final season of Derry Girls.

The 1990s set show follows the exploits of a group of Northern Irish teenagers who attend the Lady Immaculate College; written by Lisa McGee, it’s inspired by her experiences of growing up during ‘The Troubles’.

Here’s the synopsis for the new run:

“While there’s hope in the air that The Troubles may finally be over, their troubles are only just getting started as they get ever closer to ‘adulthood’.”

Damien Molony (Being Human) also appears this season, apparently cast as a ‘hot plumber’. As does a DeLorean, with Sister Michael as the wheel!

Of course, the show has served as a launch pad for some of its cast. Nichola Coughlan stars in Bridgerton, while Jamie-Lee O’Donnell had a major role in Channel 4’s prison drama Screw. Meanwhile, Dylan Llewellyn has landed a role in the upcoming Pistol, directed by Danny Boyle and due in May on FX.

While airing on Channel 4 in the UK, Netflix has made Derry Girls an international hit too.

There’s no news of a start date just yet, but we’ll keep you posted.