Trending as number one in the UK on Twitter, the communal #TheUltimateGinger watch of the Doctor Who Series 5 episode Vincent and the Doctor inspired fans all around the world and helped them feel less isolated while striving to stop the spread of a global pandemic.

Ahead of the tweet-along, fans shared their artwork and inspirational messages for the event organizer, Doctor Who Magazine’s Emily Cook to put on a special video, which appeared on YouTube after the watch-along.

MATT SMITH: “Ahh the machine around the neck. With a mirror… on the cobbles. Running from an enormous imaginary turkey in the streets of Croatia which is actually France… God I miss Doctor Who” #TheUltimateGinger

MATT SMITH: “So me and @TonyCurran69 (who was mostly Vincent most of the time) had a wrestle… in character! And I was the Doctor and he was Vincent and we wrestled and @karengillan filmed it!” #TheUltimateGinger

I’m now remembering after those beers that Matt and @TonyCurran69 had a wrestling match in the hotel. It went on so long I remember having another full length conversation and then noticing they were STILL GOING #TheUltimateGinger

Look what I got…my dad went on a secret mission to get it for my birthday. Had no idea! Best gift. #TheUltimateGinger pic.twitter.com/u1Ip1moGFe

#TheUltimateGinger. Ah yes I believe Vincent and the doctor thought it might be fun to have a wrestle and see who’d win….. not sure if the outcome? @karengillan who’s your money on? You remember that Matt?

RC: so we started writing this episode when we were on holiday the year before. We stuck up photos of van gogh pictures, and waited for some ideas to come to us. it was my daughter @scarcurtis who said ‘couldn’t he see the monster in one of the paintings. #theultimateginger

RC: So – here’s the thing – the key reason I wrote this episode – was out of love for my sister Bindy. She was a gorgeous and brilliant person, 2 years older than me. She loved Vincent Van Gogh and life. She couldn’t have been more full of generosity and joy. #TheUltimateGinger

RC: But half way through her life she was hit by depression and intermittently it hurt her for the rest of her life. And a few years before this show, like Vincent, she took her own life. #TheUltimateGinger

As fans struggle with isolation from social distancing, the emphasis this time is on mental health, as van Gogh himself struggled with mental illness and ultimately took his own life at the age of 37.

The Doctor, via screenwriter Richard Curtis, put it this way in Vincent and the Doctor:

Hopefully the group watch and sharing added to your pile of good things. If you’re struggling, talking helps. Call someone you trust. There are also some helplines you can contact for support such as these in the UK and the USA. 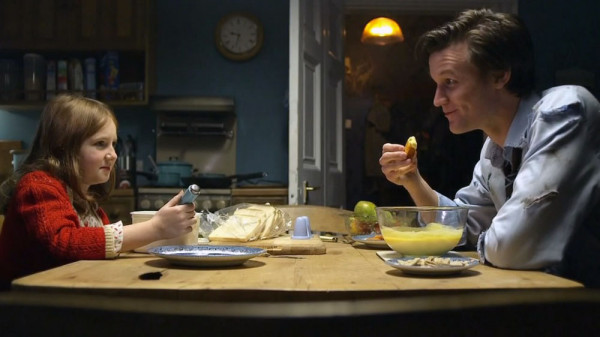 The next Doctor Who watch-along will be of the eleventh Doctor’s first episode, The Eleventh Hour on Friday, April 3, the tenth anniversary of Matt Smith’s Doctor’s world premiere. Begin watching at 7:00 p.m. BST and use the hashtag #FishCustard.