The penultimate season for Tom Baker’s fourth Doctor, with a full season of Lalla Ward as Romana, is the next Doctor Who release to come to Blu-ray with Season 17.

The Season 17 set includes the following stories from 1979 and 1980, newly remastered from the best available sources:

From the press release:

In 1979, Tom Baker’s Doctor was in full flight. With Douglas Adams (The Hitchhiker’s Guide To The Galaxy) as script editor, the series leaned into Baker’s penchant for humour, and paired his Doctor with a regenerated Romana (Lalla Ward) as his travelling companion. Together, they would form one of the most popular Doctor/companion duos of all time.

Although Season 17 was crippled behind-the-scenes by strike action (resulting in the season finale being abandoned part-way through production), it remains a beloved slice of Doctor Who history, featuring the return of Davros and the Daleks, and one of the all-time classic stories, Douglas Adams’ own City Of Death. 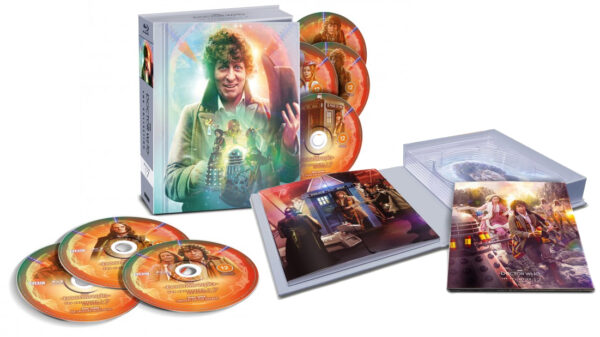 Brand New Documentaries – Including a Making-Of documentary for Destiny Of The Daleks, and new featurette for The Creature From The Pit
Tom Talks – A candid interview with Tom Baker as he gives us his unique take on life, the universe and everything
Douglas Adams Tribute – Friends and colleagues remember the Doctor Who writer/script editor and creator of The Hitchhiker’s Guide To The Galaxy
In Conversation – Matthew Sweet chats to Bob Baker, writer of Nightmare of Eden, co-creator of K9 and one of the creative forces behind Wallace & Gromit
Behind The Sofa – New episodes with actors Colin Baker, Katy Manning, Matthew Waterhouse, Nicola Bryant, June Hudson, Graeme Harper & Mat Irvine
Lalla Ward Interview – An extensive interview discussing her first year on the programme.
Updated Special Effects – View Nightmare of Eden with optional new effects
Shada – An updated version of the ‘lost’ story, completed with enhanced animation and presented in six episodes for the very first time, alongside the original 1992 VHS and 2017 versions
Exclusive New Audio Commentaries – With Tom Baker on episodes of Destiny Of The Daleks and City Of Death, and Lalla Ward & Catherine Schell on City Of Death
Extended Episodes – An early cut of The Creature From The Pit Three
Blu-ray Trailer – A familiar face returns in a brand new mini-episode of classic Doctor Who
Immersive 5.1 Surround Sound – On Destiny of the Daleks and Shada
Rare Gems From the Archive – BBC archive material covering the promotion of this season
Convention Footage – A triumphant 1997 appearance from Tom Baker
HD Photo Galleries – Including many previously unseen images
Production Subtitles
Behind-the-scenes information and trivia on every episode
Scripts, Costume Designs, Rare BBC Production Files and Other Rarities from our PDF Archive
And more

You can pre-order Doctor Who: The Collection – Season 17 from Amazon, Zavvi, Rarewaves and HMV in the UK, from Sanity and JB in Australia and Amazon in the US. Here’s the Amazon link.