19-year-old Louis Moorhouse from Bradford, England has reached his goal to raise the necessary funds to make his dream come true of having the world of Doctor Who at his fingertips — with a recent generous gift from Chris Chibnall.

The Doctor Who showrunner, who is currently filming Series 13 of the programme, pledged £1,000 plus an estimated £250.00 in Gift Aid to Moorhouse’s Crowdfunder page to pay for Touch to See books to be distributed for free to visually impaired children across the UK by the books’ creator, publisher and distributor Living Paintings.

Along with his gift, Chibnall left this message on the fundraiser page:

“Louis, this is a wonderful project. I think the Doctor would be cheering you on, all the way. All respect, admiration and support to you.”

Touch to See books include raised tactile pictures accompanied by atmospheric, educational and entertaining audio guides. The audio guides, often narrated by famous people, help fingers explore the tactile images, tell the stories of the pictures and describe their features. In this way, the senses of touch and hearing combine to make up for the missing sense of sight. Colour images included in the books enable them to be shared with sighted friends, family and classmates.

When contacted by CultBox, Louis Moorhouse gave this statement:

“It was absolutely mad to wake up this morning and see that Chris Chibnall had given a donation! And a very generous donation too! To have such recognition from the man who literally runs Doctor Who at the moment means a lot. Thank you Chris, I really appreciate your support.” 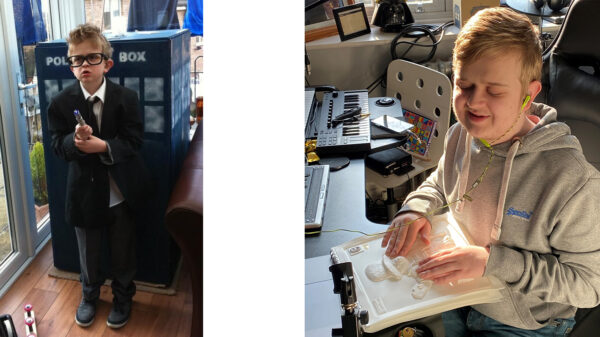 Blind since he was 18 months old, Moorhouse has enjoyed a world of information and adventure via Living Paintings books. The books helped him learn Braille by making it possible for him to ‘see’ in his own way the all-important illustrations in picture books.

He has been a big fan of Doctor Who since he was young and he described on his Crowdunder page his desire to fully meet the weird and wonderful Doctor Who characters, aliens, monsters and devices he is unable to see.

“If I could sum up what I think is the most important thing about my campaign I would ask a sighted person to just imagine – close your eyes and now imagine you can’t open them again. This is how it is and now you want to read a book or watch Doctor Who. How are you going to do that? How important is reading a book to you? As a sighted person how would you feel if that was taken away from you and you couldn’t read anymore?”

Moorhouse reached his goal with 35 days to spare and now his Crowdfunder page has a stretch target of an additional £10,000 to raise a total of £25,000 to produce even more free Touch to See books for visually impaired children.

I’m so excited to say that my Doctor Who campaign with @LivingPaintings has reached its £15,000 target!! I have no words. Thanks so much to everyone who donated or shared the campaign, we’re extremely grateful. Can’t wait to see what happens next as we enter the production stage. pic.twitter.com/smrfPSy43C

To help Louis Moorhouse raise further funds for more Touch to See books, his Crowdfunder page can be found here.