Alex Kingston has joined the Doctor Who: Time Fracture production with a pre-recorded cameo as the legendary River Song.

Her appearance was teased on 14 June with this video.

Doctor Who: Time Fracture is a live immersive theatre experience in London in which the audience participates in the story.

Hello Sweeties! We have an announcement to make… 🚨

The sensational Alex Kingston has joined Operation Time Fracture with a pre-recorded cameo as the legendary River Song. 👠📖

Kingston is dressed for her cameo in a demure Victorian era costume – with the exception of the extravagant red stilettos first worn by River Song in the Doctor Who Series 5 episode The Time of the Angels. 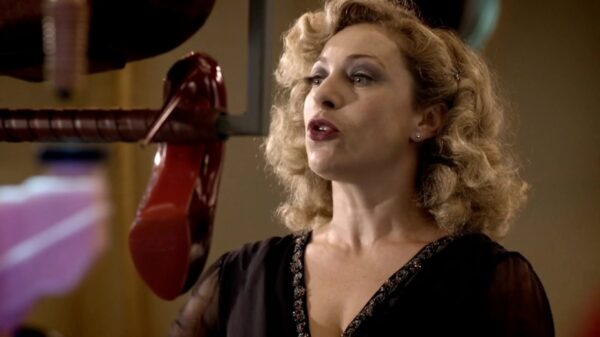 Alex Kingston has recorded a cameo appearance for @dwtimefracture 💋 Get your tickets to the immersive theatrical adventure here ➡️ https://t.co/VEJHci2PtQ pic.twitter.com/YX8fJDPrSM

Doctor Who: Time Fracture is booking tickets into April 2022.