itv have announced start of filming on Doc Martin‘s final series. The show, follows the life of a GP with a brusque bedside manner and a blood phobia. With its setting a core part of the appeal, it takes place in the picturesque Cornish hamlet of Portwenn (in real life, Port Isaac).

Since 2004, Doc Martin has notched up sixty-nine episodes and a tv movie. This final run adds a further eight to the tally, plus a special finale.

Here the synopsis for the Doc’s final series:

At the end of the last series the Doc decided, after having his medical career scrutinised by the General Medical Council because of his blood phobia, that he would resign from being Portwenn’s GP.

This final series sees the Doc making efforts to overcome his phobia, and beginning to question whether he made the right decision about resigning. He and Louisa have also welcomed a baby daughter, Mary Elizabeth, a sister for four-year-old James Henry. 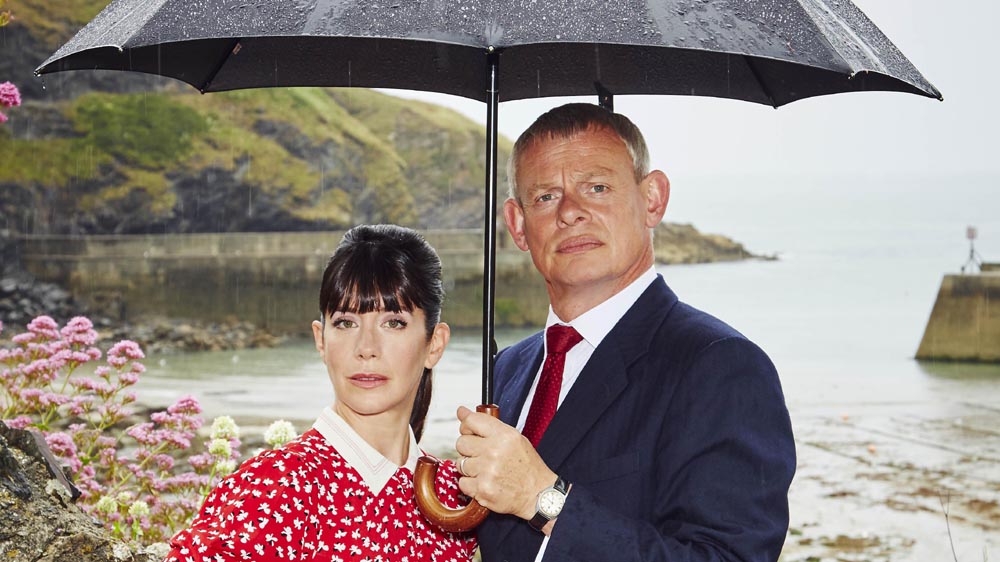 With Louisa pursuing her new career as a child counsellor in his old surgery, the Doc is left literally holding the baby, and indulging his hobby of repairing clocks on the kitchen table. But does he really want his old job back?

Of the show, Martin Clunes commented:

“I have loved going to Cornwall to make Doc Martin over the last 18 years, and I have looked forward to returning to this beautiful county this year for the tenth and final series.

The people of Cornwall, and Port Isaac in particular, have always been so helpful to us when we are making the series. We have some great story lines for the new series, and for the Christmas special, which I hope Doc Martin fans will love.

I shall miss Cornwall, and all the lovely people we have worked with. But it is the right time to say farewell to the Doc, and Portwenn.”

We learnt last year that Clunes and producer Philippa Braithwaite have chosen to end the show, feeling the time is right to say goodbye.

To sweeten the pill, itv have also commissioned a festive visit to Portwenn too. Head of Drama Polly Hill said:

“It’ll be sad to see the series come to an end after entertaining audiences on ITV for the last 18 years, but we’ll make sure the finale is memorable and befitting such a success story.”

Naturally, we’ll keep you posted – but we expect the show to find a home in itv’s autumn schedule.