Some Doctor Who stories have characters so well written and cast that they leave you wanting more.

Like Jago and Litefoot before them, the team from 1988’s Remembrance of the Daleks cried out for their further exploits to be chronicled.

Matt Fitton’s ‘Changing of the Guard’ begins the series with the team’s political master Sir Toby Kinsella (Hugh Ross) under investigation. Called to account by a parliamentary committee, he has some political manoeuvring to grapple with while both Rachel and Alison are compelled to give evidence.

Meanwhile, his obnoxious underling Templeton is trying to assert authority as the team deals with reports of gangland violence. While not perhaps their usual fare, the case comes their way when witnesses report the villains all bear the same face.

An entertaining tale ensues, with Alison going undercover to question the multi-faceted villain while Gilmore finds out how much support he commands from his men.

Their remit confirmed, it is back to business for Justin Richards’ ‘The Concrete Cage’ as ICMG is called in to one of the Government’s new high profile, high-rise social housing projects.

With workers suffering ghostly visions and some unexplained suicides, the team try to fathom a rational explanation. Michael Troughton guests as a historian who provides some intriguing local colour.

The third tale begins on a much more personal note, reluctantly bringing Alison back to her childhood home and estranged father. Written by series director Ken Bentley, ‘The Forgotten Village’ introduces an old boyfriend and fills in some background detail before events spiral out of control, forcing her to summon the team when a mysterious contagion presents with dementia-like symptoms. 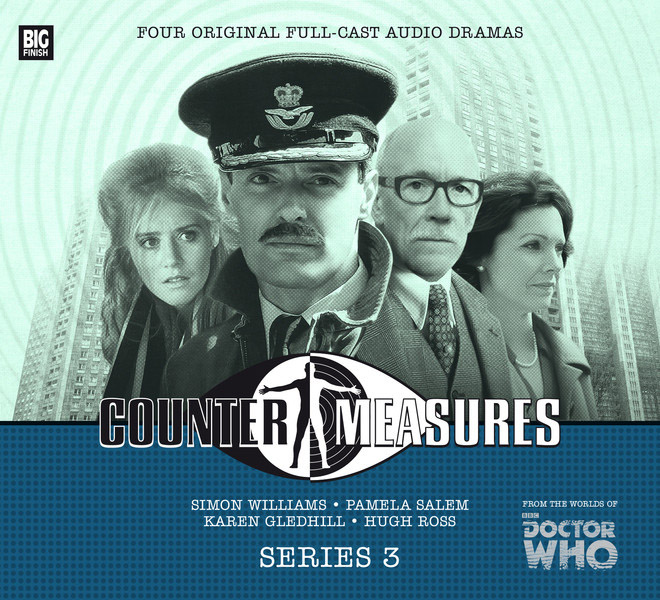 Finally, ‘Unto the Breach’, from series script-editor John Dorney, brings Counter-Measures into the Cold War for a dangerous mission behind the Berlin Wall, still reeling with the consequences of the previous tale. When footage shows the other side have a captured alien, Rachel and Ian are despatched under orders to either rescue or eliminate the creature.

It is great to see the team’s world expanded once again and to bring them out of their comfort zone. It also provides the chance for an excellent gag regarding the fact that alien incursions usually happen in the Home Counties!

Throughout this set, tensions run high in the team. Alison has become far more questioning of Sir Toby’s motives, barely concealing her contempt at times. We too are kept guessing, with Hugh Ross continuing to dazzle in his role as the pragmatic, ambiguous leader.

Romance is almost discussed by Gilmore and Rachel, although the subject is sabotaged first by a call to duty and then professional attitudes; while Rachel remains in charge, matter military are Gilmore’s preserve and the two often come into conflict.

Counter-Measures has carved out a brilliant niche, with tales keeping one foot in the world of sci-fi and the other in Cold War paranoia. After twists and turns, and some unexpected betrayals, the series concludes on a terrific cliff-hanger with a shot fired… we can’t wait to see how they get out of this one!

Extras: The set comes with a disc full of interviews that discuss the production and how they are initiating longer term themes with the fourth series already commissioned. We also hear the positive reaction to the cast at conventions, and how outrageously naughty Simon Williams is to work with!