Each of the Dark Eyes releases consists of four CDs of audio drama, and this final set was jointly written by Matt Fitton (who wrote Dark Eyes 3) and John Dorney (recently seen on Only Connect and a regular Big Finish writer and actor).

For those new to the series, the central idea is that a woman called Molly o’Sullivan was infected by Time Lord technology a side effect of which was her eyes turned black. The last series ended with Molly being separated from the Doctor who now travels with companion Liv Chenka (Spooks star Nicola Walker). Although most listeners will come from having heard the previous three sets of stories, this particular release is still accessible for those who haven’t.

Matt FItton and John Dorney wrote alternate episodes with Matt also outline the whole set. The action starts in London where the Doctor and Liv meet the Donaldsons (sister and brother) played by Beth Chalmers (Big Finish regular) and Barnaby Kay (Nicola’s husband in real life). Among the mysteries of a mysterious group trying to capture the Doctor, Liv has time to strike up a relationship with war-hero martin Donaldson as an increasingly unlikely set of coincidences guides their actions in the style (almost) of a Philip K Dick story.

Matt Fitton moves the action to Paris where the Doctor and Liv now have to contend with Daleks in the Moulin Rouge. If that image isn’t unsettling enough there is also a local artist and the proprietor of a certain night-club to contend with. 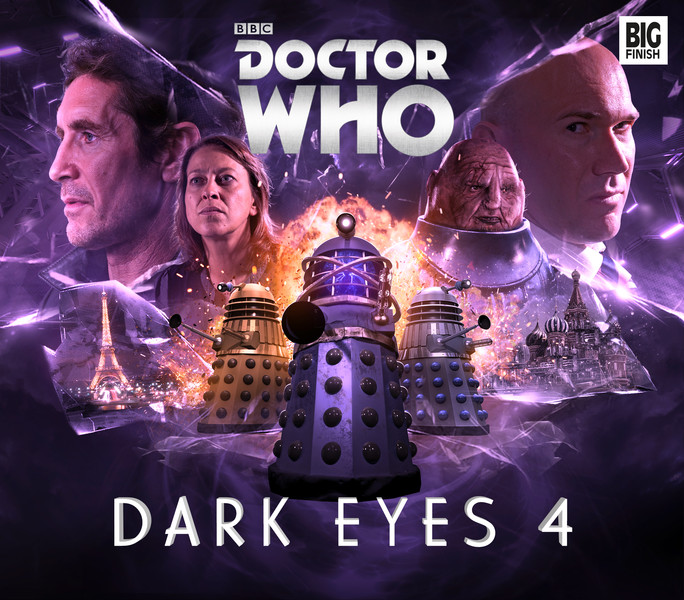 John Dorney takes the action to a new level and adds Sontarans (Dan Starkey) and Alex Macqueen’s Master to the mix. He finds space for several dashes of characteristic dry humour as we learn something of the plans of the Dalek Time Controller.

Matt Fitton wraps up the set and the overall series in a finale that involves sacrifice and a menace called the Eminence – an almost invincible alien force that also appeared in Dark Eyes 3. The resolution is conclusive and takes the Eighth Doctor to a new place, ready for another set of releases coming in 2016.

As usual there are too many strong performances to single out more than a very few. Nicola Walker is on top form as Liv Chenka, Macqueen’s Master a delight as ever, but there are no weak deliveries here thanks to Ken Bentley’s expert shepherding.

For a set of releases original conceived as a one off, this series has entertained but not overstayed its welcome. The Doctor has moved through a set of stories connecting together several parts of the Big Finish milieu and never dominated the action but stayed true to his essential character even though experience has left him changed from the figure we first saw on our screen in 1996. He may be several steps closer to the figure we saw in ‘Night of the Doctor’ but he has plenty more to give us.

What did you think of Dark Eyes 4? Let us know below…