A busy month for Big Finish started with the release of The Third Doctor Adventures: Volume 1.

In the absence of Jon Pertwee, Tim Treloar takes the part of both a narrator and the Third Doctor, alongside Katy Manning as Jo Grant and Richard Franklin as Mike Yates. The boxset consists of two 2-CD stories.

The first story is ‘Prisoners of the Lake’ by Justin Richards. This story has the unenviable task of setting the brave new era of a re-cast third Doctor in motion and telling a decent story. Apart from the main cast we also have Caroline Seymour as archaeologist Freda Mattingley, and Robbie Stevens and John Banks playing several other parts each.

The story centres on a strange building found at the bottom of Dunstanton Lake, talking statues and an ancient menace. With a new actor as the third Doctor, the action is well balanced between Jo, the Doctor and Mike as they explore the structure, deal with a range of aliens and investigate disappearing artefacts.

Carolyn Seymour’s character acts as a good balance to the UNIT team but the story does spend a lot of time dwelling on the ins and outs of underwater exploration, rather than telling the story. The use of a narrator as a device to both introduce Tim Treloar and cover the absence of other key parts, such as the Brigadier, takes some getting used to and the effect is mixed at times. 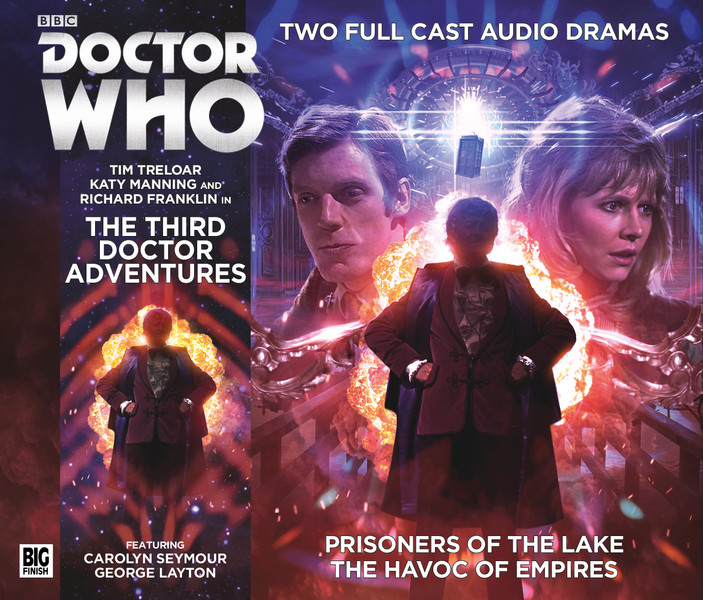 The second story is Andy Lane’s ‘The Havoc of Empires’. This is a large cast Othello in space and mixes a space-station, mistaken identity, bombs, bits of 2001: A Space Odyssey, a wedding, a love story and an execution to great effect.

The larger cast are tremendous with Hywel Morgan and Joanna Bacon just shading it as Regent Tharlar and Lady Gurlen, though Jo’s scenes with the space station AI (Helen Goldwyn) are very strong. If there is any complaint it is that Mike Yates had less to do than he might, though Jo shines brightly in this story.

Nick Briggs directed both stories and also wrote the music with Jamie Robertson. The whole set feels of its time and evokes the third Doctor strongly. We will undoubtedly get more in this range, and if they match the heights reached in ‘The Havoc of Empires’ fans are in for a real treat.

Extras: A whole CD’s worth of behind the scenes material.

Published in September 2015 by Big Finish.

What do you think of the set? Let us know below…