With a temporal twist worthy of the Doctor himself, the story which was planned to introduce Nicholas Briggs’ new villain to the Big Finish canon has actually turned out to be the third to employ them.

‘The Eminence’, a malevolent gaseous entity with which humanity has endured a lengthy conflict, troubled both the Sixth Doctor in last year’s ‘Seeds of War’ and more recently the Eighth in Dark Eyes 2.

This tale begins with the Doctor bringing Leela to the planet of Delafoss to show her a successful human colony. Far from the expected idyll, the planet turns out to be under the thrall of a merciless enemy who have made slaves of the population and are ruthlessly exploiting its natural resources.

Promptly falling in with a pair of desperate resistance fighters, the time travellers find themselves helping to gather information on the ship, the ‘Infinite’, which the Eminence are constructing; a gigantic destroyer which has the potential to turn the war in their favour.

Moving at a cracking pace, Destroy the Infinite presents seemingly insurmountable odds for the Doctor to overcome, as his interest in the Eminence is soon matched by theirs in him. They perceive him as a threat and set their sights on recruiting him with their “Breath of Forever”.

Split up during the action, the Doctor finds a good pseudo companion in resistance fighter Sarla (Christine Roberts) while Leela becomes the unwilling passenger of Davent (Ian Hallard), a daredevil human pilot sent to collect vital information for the war effort and clearly has the hots for her. 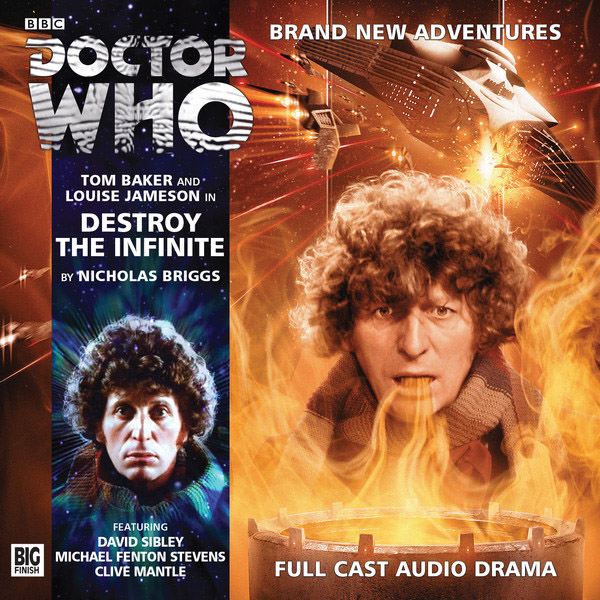 With the Eminence inhabiting the body of humans, who become their Infinite Warriors, their voices become harsh and over-modulated, prone to anger and relentlessly barking orders. David Sibley’s provides the voice of the Eminence itself, which is indescribably creepy.

In contrast, the human forces seemingly channel vintage war films, or perhaps a touch of the British Airmen from ‘Allo ‘Allo, with more than a smattering of “Look here” and “Old Girl”. Despite these somewhat comic accents, there are strong themes at play here, not least when it is revealed that the Eminence have packed their new ship full of human hostages and those lives have to be weighed against the destruction the Infinite

With the Doctor indisposed, it is Leela’s turn to demonstrate her tactical abilities and she rises to the challenge admirably. Louise Jameson’s savage takes no prisoners in conversation and will not be condescended to, with her fierce loyalty to the Doctor inspiring the Earth forces to action for an immersive space battle which is backed by a suitably stompy score.

With some excellent quips from Tom Baker, who is clearly having the time of his life, Destroy the Infinite is an enjoyable slice of action adventure. The tale, which has some very dark undertones and a terrifically scary enemy, is shot through with a pleasing theme of human resistance against all the odds.

Extras: Over 14 minutes of interviews with cast and crew, with lots of focus on the genesis of The Eminence from writer/director Nicholas Briggs.