With barely time to catch our breath since December’s epic ‘Only the Monstrous’, this second box set presents three further adventures for John Hurt’s missing incarnation of our favourite Time Lord.

Surrounded by terrific, thumping version of the theme, these stories ostensibly deal with attempts to employ super-weapons in the struggle against the Daleks. In truth, they are far more than this; the “infernal devices” of the title are an exciting and dramatic hook on which to hang a series of explorations about the morality of war.

John Dorney’s ‘The Legion of the Lost’ starts in the heat of battle with the War Doctor working to his own agenda, seeking to eliminate a weapon called the Annihilator from the conflict. Knocked out by an explosion, he becomes witness to a dangerous alliance between his own people and the Technomancers, practitioners of magic who offer a way to swell the ranks of the Time Lord troops at a terrible cost.

‘A Thing of Guile’ sees our hero coerced into a mission in search of a secretive Dalek base, in the company of the manipulative Cardinal Ollistra herself. Phil Mulryne’s script has the Daleks thinking the unthinkable, with the themes of the tale sharing some similarities with the plans of the Cult of Skaro as they attempt to gain an advantage in the war.

The final story is Matt Fitton’s ‘The Neverwhen’. Dropped into the midst of a middle of a planetary conflict ravaged by temporal flux, the War Doctor finds the two sides battling as changes impact – the combatants shifting through mutated physical forms (spider Daleks!) and ever-changing weaponry, from spears to stasers. 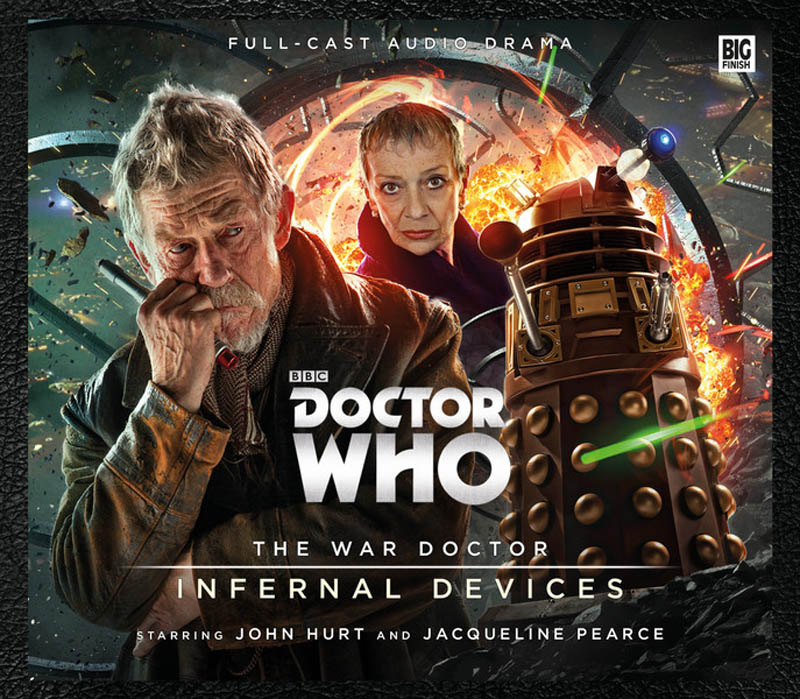 John Hurt sparkles in the central role, moving from disgust at his people’s actions to notes of optimism, and it is clear that his incarnation cannot help but be the Doctor, despite his best efforts. He is well matched by Jacqueline Pearce, who is wonderfully cold and conniving Time Lady who sees herself as the Doctor’s puppet mistress, and there are many thumping good scenes between the pair.

In the guest cast, David Warner dives gloriously over-the-top as the fanatical Shadovar, calling forth his demonic gods, while Zoë Tapper’s Collis convinces as the conflicted soldier caught up in the first battle. We also loved the fussy Co-ordinator Jarad (Jamie Newall) and his gung-ho accomplice Captain Solex (Robert Hands) who bicker like children at times.

Through these three tales we get a sense of the Time Lords’ desperation; they are prepared to sacrifice anything in order to beat the Daleks and this chimes well with what we saw of the scheming Rassilon in ‘The End of Time’. It seems that it has become the role of the Doctor, though he eschews the title, to be his people’s conscience and he is determined to keep them off the darkest paths

With sequences of strong action, stunning sound design and through-provoking themes, we can’t get enough of this War Doctor. With Daleks, dilemmas and dreadful consequences, the series is gloriously exceeding many of our expectations.

Released in February 2016 by Big Finish.

What did you think of Volume 2? Let us know below…