The Dalek Protocol kicks off Dalek Universe, Big Finish’s latest Tenth Doctor series with a prologue for the Fourth. It is also a sequel to the Pertwee classic Death to the Daleks, a favourite of Dalek supremo Nicholas Briggs.

The action returns us to the planet of the Exillons. With the space plague in a deadly second wave, the need for the mineral Parrinium is more urgent than ever; found in abundance on the planet, it is essential to save the lives of millions. 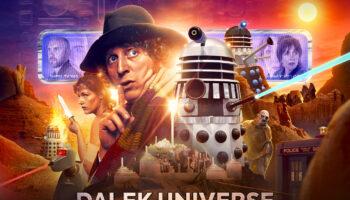 Aboard the Thunderbolt, mission commander Captain Barnard butts heads with his over-zealous security chief, blissfully unaware that Mark Seven is a highly sophisticated Space Security Service android. He is not the only SSS agent on board either – Anya Kingdom is also undercover as a loading supervisor.

As the human mission concludes, it coincides with an attempt by a group of indigenous warriors to reclaim their planet. Installing a new beacon on the ruins of their city, the TARDIS again falls victim to its power drain…

That way leads to death!

Writer/director Nicholas Briggs returns us to Terry Nation’s fertile storytelling world of the Exxilons some years on. He builds on the original themes, considering the how humanity has affected this planet. We revisit the infamous city and its beacon, with talk of mining rights traded for technology and education. Fan favourite Bellal even appears, the native who once gamely ventured into the deadly city with the Doctor. As the story develops however, we leave the planet and focus on the Parrinium. Allied to the fate of this mineral consignment is the fate of the whole crew and countless millions of lives.

Tom Baker is on terrific form, as ever, and it is always a treat to hear him paired with Louise Jameson’s Leela and John Leeson’s K9. All three are well employed as they solve the puzzles of divided loyalties in the Thunderbolt’s crew. Returning as Anya Kingdom, Jane Slavin now plays the true iteration of her character met briefly at the conclusion of The Syndicate Master Plan. She is brave, bold and engaging, and any fears we had about another companion who meets the Doctor out of order were promptly dispelled; Anya’s desire for redemption culminates in a terrific scene between with Leela, who is prevailed upon to preserve her secrets.

The other notable character here is Mark Seven, Terry Nation’s android super-spy, first created for his spin-off Dalek Series. Played by Joe Sims, he is rather aloof and a bit of an enigma but certainly very interesting. For a better read on his character, his outing with River Song is worth a listen. That also links to Dalek Universe, we understand. Among the wider guest cast, Jez Fielder is particularly impressive as the snarling and spitting warrior leader Gislen and Nicholas Briggs is on double-duties as both the Daleks and the weary Captain Barnard.

Composer Jamie Robertson provides a splendid score, replete with Exxilon chanting and drumming. In the sound design, there are some excellent moments as the beacon wreaks havoc on K9 and the TARDIS, as well as the clamour of the action scenes.

The Dalek Protocol is busy as both a sequel and a prologue, as well as introducing characters for later stories. Using the SSS agents here knits these events into the wider chronology of the Daleks, a fact which pleases us immensely. However, with that said, the story is tremendous fun in its own right; it takes the building blocks of Death to the Daleks and spins its own tale of loyalty and redemption.

All in all, this is cracking stuff and it definitely bodes well for the Dalek Universe series.

Doctor Who – Dalek Universe: The Dalek Protocol is available on download and CD from Big Finish.