Having always felt more like the lead of her own show, rather than the guest star, it is no surprise that River Song has thrived on audio, courtesy of Big Finish.

After dealing with an ancient threat to the universe in the first volume of her adventures, alongside the Eighth Doctor, and becoming entangled with both the Sixth and the Seventh in her second, this third quartet of stories takes a more personal tack as the devilish Madam Kovarian (Frances Barber) returns for another attempt on the Doctor’s life. 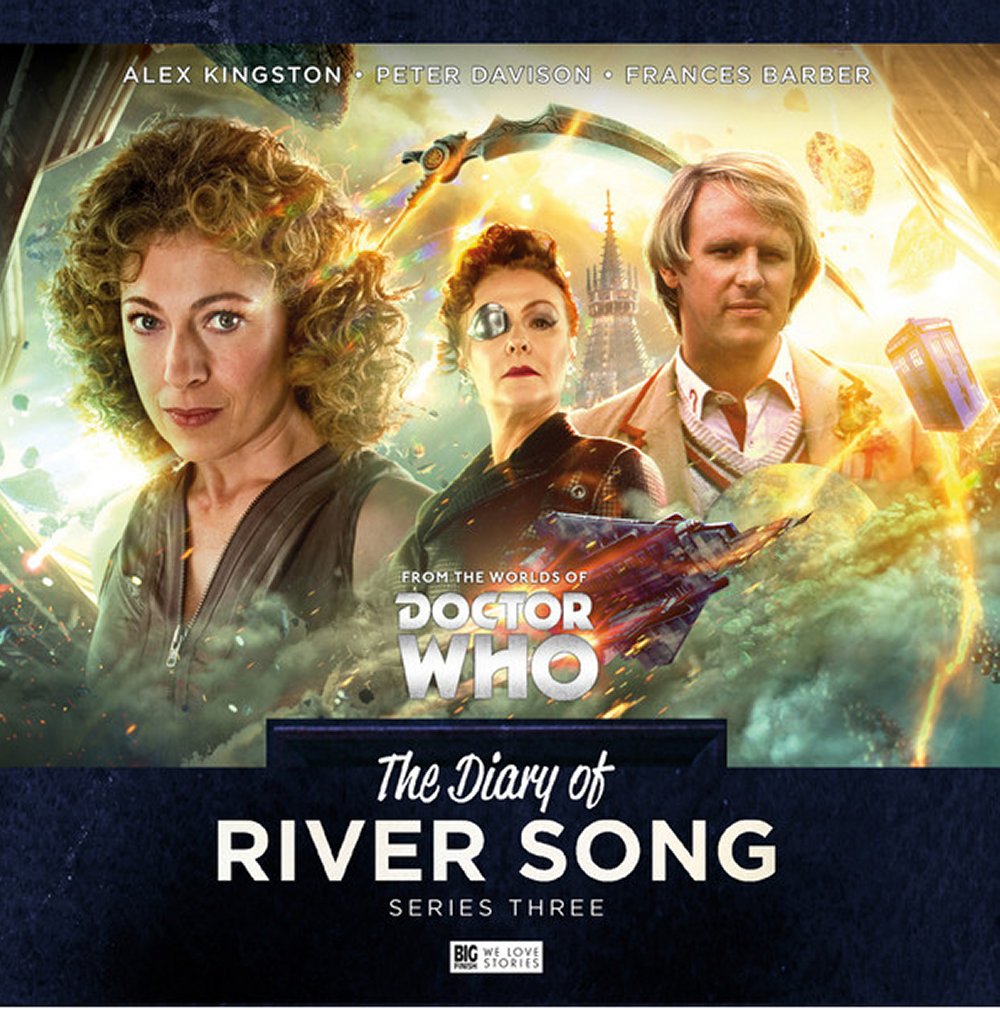 The Lady in the Lake

Riffing off the events of ‘A Good Man Goes to War’, which revealed River Song’s parentage and the agenda of the sinister eye-patch lady, River tracks down some of her fellow experimental subjects. Fleeing from the fall of Demon’s Run, the escapees have discovered their true nature and River catches up with them at a “Euthanasiam” – a sci-fi extrapolation of a Dignitas-style clinic which offers a variety of creative ways to end your life, all with a temporal twist which means that you handle the paperwork before travelling back in time to meet your maker.

Nev Fountain’s story starts from a dark place and after quite a romp, plus a devastating twist, lands River right back there. As well as being thoroughly entertaining, it provides a great exploration of the concept of regeneration and how it might affect us if we were granted the power. Taking the role of pseudo-companion throughout is Kevin (Ian Conningham) who works at the Euthanasiam playing Death and enjoys his work – though River’s actions may have him destined to return to the mundanity of a call centre.

Feeling in need of some time with the Doctor, River summons him. However, it is the Fifth who arrives and he is travelling in unexpected company… a sparky new companion named Brooke (Joanna Horton).

A Requiem for the Doctor

Next up is an historical adventure, as Jacqueline Rayner provides a trip back to Vienna for the end of Mozart’s life and the performance of his final work.

Feeling like the most traditional Doctor Who story of the set, the trio probe the mystery surrounding the composer’s death and the completion of his final work, finding a conspiracy involving the young wives of Vienna, who may have had some alien assistance in sending their elderly husbands towards the next life.

As the investigation proceeds, the story also cleverly explores River’s relationship with the Fifth Doctor – who is oblivious to her romantic advances, though understandably curious about her.  He is also sensitive and paternal towards Brooke, whose nose is put out of joint by River’s arrival.

There are some great comic moments, such as River’s fast-talking to cover her mention of the “sonic”, but the story conceals a tragic heart and turns on an element which, while not uncommon in recent series, is seldom done with such vigour and heart.

My Dinner with Andrew

Complicated and clever, framed by the structure of a lengthy gourmet meal of multiple courses, John Dorney’s story takes place at “The Bumptious Gastropod” – a restaurant which exists outside the flow of time (take that Douglas Adams!)

With multiple iterations of River and the Fifth Doctor, the twists and turns of this hilarious temporal farce see River endeavour to keep one step ahead – or should that one step before -Madame Kovarian and keep an unsuspecting Doctor safe.

As well as Frances Barber, who reprises her villainous role with relish, the story belongs to Jonathan Coote; as well as playing both a chef and an assassin, his turn as the Gastropod’s Maitre D’ is hilarious and remains wonderfully unflappable throughout, with just a touch of the Policeman from ‘Allo ‘Allo.

For the final tale, script-editor Matt Fitton provides a closer look at the malicious midwife. It follows that a villain of her intensity would not have been dissuaded after one setback and, although we saw get her comeuppance in the distorted timeline of the Series 6 finale, this story provides a proper and far more satisfying conclusion for the character (rather than the brief onscreen namecheck in Matt Smith’s packed finale.)

Introducing us to another group of Kovarian’s assassins in training, the story brings River back to her roots as we gain some more glimpses into her childhood and learn of those who have followed in her footsteps… her siblings if you will.

With an all-female, there are plenty diverse characters and some great, fractious interplay between then with multiple roles for Francesca Zoutewelle and Pippa Bennett-Warner (Saibra from ‘Time Heist’), as well as Nina Toussaint-White.

While Doctor Who onscreen brought River’s timeline full circle for ‘The Husbands of River Song’, Big Finish have wisely taken the opportunity to delve into her origins; when you consider the space between the abduction as a baby and the appearance of Mels in ‘Let’s Kill Hitler’, it is clear that there is plenty of potential for stories.

Painted as a loner on screen, often defined by her conflicting deathly and desirous feelings for the Doctor, this set of adventures explicitly explores River’s isolation from any familial connections. Leaving aside the Ponds, although we would dearly love them to play a role in future adventures, these ‘siblings’ grant Alex Kingston some fresh angles to work with her character and her interactions with the Fifth Doctor were fun too – though they are certainly a mismatched couple.

Returning to Madam Kovarian, it was rewarding to explore the zealot whose true motivations were only really understood onscreen after her appearances, as well as the poisonous environment in which the young River was raised as a killer. Frances Barber excels at playing off-the-hook villainy, but she is provided with more than just pithy barbs here, and it is great to hear the character under pressure and on the back foot at times. Also, as the extras reveal, Frances Barber clearly loves the work and was thrilled to be asked back.

As we often find ourselves doing ahead of listening, a glance at the cast list caused us to make some assumptions about some of the character’s identities. We are pleased to say that, not only were we utterly wrong-footed, but the truth was far more interesting.

As ever, the sound design is superb throughout but we must make a mention the Howard Carter’s bombastic theme. Surely this is as close to a Bond theme as Big Finish as come?

All in all this is a superb quartet of stories, both funny and complex, which we highly recommend. With an increase in the release rate, it is only six months until Volume 4 which promises River’s encounter the Fourth Doctor. We cannot wait!