‘Nightmare Country’ was a storyline pitched for Doctor Who‘s 21st season, but ultimately shelved. With a reality bending premise, the production team deemed it beyond the scope of a 1980s’ BBC budget.

While Big Finish have adapted numerous other Lost Stories over the years, this one remained under the radar, languishing in writer Stephen Gallagher’s files. Recently rediscovered, it is one of two new releases, along with the original Season 23’s ‘The Ultimate Evil’. 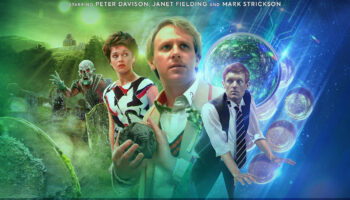 The story jumps straight in with the Doctor in heroic mode. On a hostile world full of graves and crashed spaceships, he is travelling solo and has seemingly lost his memory. But that’s not the half of it: we soon discover he is wired into a reality engine with six others. Aiding old friends, the Guild of Reality Engineers, the Doctor is helping to fashion a bespoke home world for them.

The action develops on two fronts: while the amnesiac Doctor deals with threats inside the machine, Tegan and Turlough handle the politics outside. It is soon apparent that the project has gone dangerously off the rails.

Stephen Gallagher, who wrote both ‘Warrior’s Gate’ and ‘Terminus’, spins a high-concept tale which draws on the idea of virtual reality. At the time, such technology had only industrial and military applications. The story unfolds with the structured pace of a four-parter, with some skilful wrong-footing at play.

His idea for the Guild of Reality Engineers is an engaging one. People who repair spacetime seem just the sort for the Doctor to befriend. The reality engine itself reminded us of ‘Shada’ and the scientists who lost their minds to Skagra’s sphere. The story also makes good use of the TARDIS, reusing various elements of series’ lore, and the secondary control room makes a welcome return.

Peter Davison’s Doctor is at the centre of the action throughout, with Tegan and Turlough well employed too. Janet Fielding gives a spirited performance, as ever, while Mark Strickson’s Turlough plays a vital role in the denouement.

In the guest cast, Ian Connington impresses as Master Builder Konis, as does Edward Dede as his apprentice Volos, who befriends the Doctor’s companions. Big Finish stalwarts Beth Chalmers and Tracey Wiles round out the cast – and it is interesting to note that all the guest cast play multiple roles here.

The score is unsettling and highly evocative of the era. Composer and Sound Designer Andy Hardwick uses synth notes and odd effects mixed together to great effect.

‘Nightmare Country’ is a real treat from one of the show’s most imaginative writers, one we did not really know we were missing. Although it is easy to understand the budgetary concerns at the time, we can now imagine the story made with an epic CGI budget to populate the nightmare world.

Doctor Who: Nightmare Country is available on CD and download from BigFinish.com