The End of the Beginning is the final monthly Doctor Who adventure, or main range release, from Big Finish. After the best part of twenty-two years, rotating through Doctors, the company are fully embracing a boxset format; simplifying their output, each Doctor will now have their ‘own range’. It is a change that has been a long time coming, but one that has caused some consternation too; for followers of a show that owes its longevity to change, we are really not that good with it! 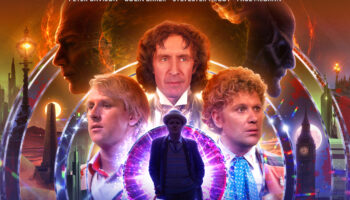 This multi-Doctor story consciously mimics the structure of the first. Each Doctor has his own adventure before they team up for the finale. Indeed, this story’s synopsis apes that of The Sirens of Time, but ups the ante: this time, the “whole of creation” and not just Gallifrey, is under threat!

The story begins in Death and the Desert, with the Fifth Doctor and Turlough in the Arabian desert. Caught up in the search for a lost city, the find themselves receiving hospitality from a Bedouin, and on the run from a persistent Edwardian treasure hunter. The resolution of the tale sets up the overarching storyline here – pieces of a puzzle laid for the Doctor by an old mentor who went off on quest for Gallifrey’s misplaced moon.

Next up is Flight of the Blackstar with the Sixth Doctor and Mrs Constance Clarke. Cooling their heels while fellow traveller Flip recovers from an alien encounter, the pair find themselves fending off a band of robotic raiders. Recruiting an old friend, Calypso Jonze (from The Lovecraft Invasion), the Doctor takes the fight to the enemy… with Glen McCready providing a plethora of robotic voices. We particularly enjoyed the sweet subplot of attraction between Connie and Jonze (Robyn Holdaway), which begs a further appearance; we hope so, as they are such an engaging character.

Then, in Night Gallery, the Eighth Doctor and Charley Pollard visit 1999 for a horror tinged affair. While the Doctor sees an old artist friend, Charley stumbles into in danger when she previews a new art exhibition. It is always a treat to hear Paul McGann and India Fisher together again and, mixing the worlds of art and vampirism, Highgate (Tim Faulkner), the Doctor’s aged friend, had a fascinating backstory.

Throughout the first three episodes, each Doctor is trailed by the sinister figure of Vakrass, Last of the Death Lords. It is not until the fourth that his purpose becomes clear. Minding spoilers, all we will say that events draw together neatly. The Lost Moon is fun and frenetic, culminating in a pleasing cameo from Sylvester McCoy’s Seventh Doctor. As Vakrass, Kevin McNally drips with Valeyard-like levels of evil, while David Schofield is a delight as the Doctor’s ancient, demented mentor Gostak the Sagacious!

Multi-Doctor stories necessarily tend to be lighter affairs, but writer Robert Valentine has created a through line which builds to a remarkably satisfying conclusion. Ironically, each of his situations are so well drawn that we almost wish this had been a four-part boxset! Despite remote recording, there is an entertaining level of banter between the Doctors and each has his moment too.

Across the four stories, excellent sound design is provided by Wilfredo Acosta, making each environment distinct. He also provides an engaging score, which is provided as a 17-minute suite.  We loved that each episode has its own title too, as well as the appropriate theme for each era of the show.

There is a knowing moment at the end in which the Doctors discuss their forthcoming plans; The End of the Beginning indeed – it seems clear Big Finish are just getting started!

Doctor Who: The End of the Beginning is available on download and CD from Big Finish.