The Fourth Doctor Adventures Series 10 Volume 1 is comprised of two four-part tales: The World Traders and The Day of the Comet. Both see Tom Baker paired with Louise Jameson’s noble savage Leela. 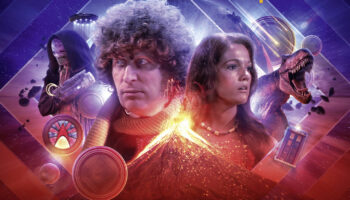 After a day’s site-seeing in 21st century London, the Doctor and Leela return to find the TARDIS missing. Due to some careless parking, it has been impounded by Amapan Investments.

Begrudgingly going through channels to retrieve his property, the Doctor finds the full weight of bureaucracy levelled against him. Frustrated, he pursues a more unorthodox approach, teaming up with a freelance journalist to break in instead. While uncovering a remarkable scheme to sell off the country’s previously unused assets, they also fall foul of some aggressive recruitment practices.

Writer Guy Adams uses ideas from the Robert Holmes classic story The Sun Makers as a jumping-off point. While retaining the satirical tone, this is a more expansive affair with an unscrupulous politician, time travel and intergalactic customers. 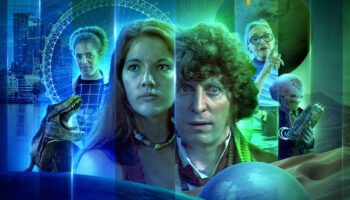 Siân Phillip’s villainous Usurian represents “the Company”, but wisely there is no attempt to replicate Henry Woolf’s memorable performance as the Collector in The Sun Makers. It might be a touch contentious in these more enlightened times. Instead, the Director is a hard-nosed executive with a penchant for withering put-downs and one eye on the stock market.

Separated from the Doctor, Leela takes on Ramon Tikkaram’s supercilious President Dunn-La, who is initially enamoured with her. She gets to have lots of fun, making a friend and belittling of Dunn-La, once bested. Sara Powell gives a charming performance as investigative journalist Emma Fremantle too, surely character with further potential. We are pleased to see she has apparently been cast onscreen in Series 13 (spoilers ahoy!)

We do have one question though: Other than for a few gags, why base this story in the 21st century? Surely the theme of corporate greed was just as relevant in the 1970s ‘present day’ of Tom Baker’s tenure.

The Day of the Comet

The TARDIS lands on a planet in the most desperate straits, with an impending comet set to wipe out all life. The majority of the population have already evacuated, while those who remain clamour for a place on the final ship.

Exploring the world, full of looters and acid rain, the Doctor and Leela hook up with Massey and Corsha – a father and daughter who hope to gather enough precious metals to buy their way on board. However, access to the Ark ship is controlled by Tynax and her guards, and inside the compound, all is not as it seems.

As the story develops the Doctor finds himself in a moral quandary; as a Time Lord he remembers this planet’s fate and knows there ought to be no survivors. 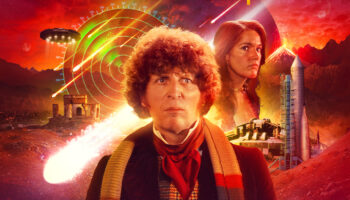 Despite the grim situation, writer Jonathan Morris injects plenty of humour into his script. There is a fair amount of capture and escape thoughout, but he makes a virtue of it; the characters joke about the chances of using the same ruse multiple times. There is also a killer cliff-hanger at the end of episode 2, which spins the story off at a different angle. For us, this it is the stronger of the two adventures.

Verkuvia, the former court astronomer who aids the Doctor, is a terrific comic creation and the star of this story. We loved the running gag that no-one could remember her name! Janet Henfrey, of course, has a superb Doctor Who pedigree – as The Curse of Fenric‘s Miss Hardaker and the first victim of Mummy on the Orient Express.

In the wider guest cast, Jon Culshaw (a BF regular at the moment) takes on dual roles; he plays both a desperate father, Massey, and the bullying head guard Sullerman. Joanna Hole (Louise Jameson’s former Tenko castmate) also impresses as Tynax, whose allegiances shift freely as the situation demands.

Both of these tales have the wit and imagination of the Williams (the producer for much of Tom Baker’s time on TV) era; The World Traders is full of satirical badinage, “Praise the Company!”, while The Day of the Comet provides gallows humour.

Throughout, Louise Jameson continues to impress as Leela, and the character is as fresh and engaging as ever. She remains dependably savage, wielding her knife and threatening violence but it is undercut with cleverness. What Leela lacks in education and experience is easily made up for with street smarts; her intelligence always shines through.

Tom Baker sparkles too and we love casting of character actors for him to bounce off, in the tradition of memorable performers like Sylvia Coleridge and Beatrix Lehmann. It grants further authenticity to the production. In the Extras, we enjoyed the Siân Philips’ remembrances of her many collaborations with Verity Lambert.

The Fourth Doctor Adventures Series 10 Volume 2 comes hot on the heels  in February, followed by a long gap; Series 11 is not due until 2022. However, there’s plenty more to come from Uncle Tom this year. He’s back for two Lost Stories in March, as well as appearing in Stranded 2. April also brings a curtain raiser for the Tenth Doctor’s Dalek Universe series, The Dalek Protocol.

Doctor Who – The Fourth Doctor Adventures Series 10 Volume 1 is available on download and CD from Big Finish. The stories are also both available as individual downloads.