Echoes of Extinction is the final audio drama piece in the Time Lord Victorious puzzle. Unavoidably delayed by the Coronavirus pandemic, it is available on Limited Edition Vinyl from Demon Records, though copies are tough to get hold of. Luckily, it is also available digitally from Big Finish.

Making a virtue of the two-sided vinyl medium, this tale involves one planet but two Doctors. On two separate visits to Orriv, the Time Lord explores the fate of a doomed world. The two parts of Echoes of Extinction may be enjoyed in either order, we began with the Eighth Doctor. Later, for completeness, we played the whole story again starting with the Tenth instead.

Echoes of Extinction begins with a quirky, compact tale set on a space station orbiting the dead planet Orriv. 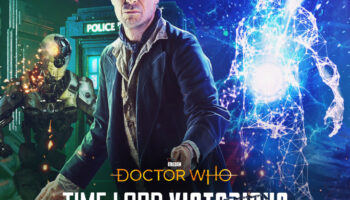 The Doctor is travelling alone, before the main events of the Time Lord Victorious storyline. When the TARDIS materialises on the station, he finds a sole occupant, Jasmine (Kathryn Drysdale), and her robotic butler. Or should that be jailer? As he investigates, he discovers that she is marooned with a homicidal murderer – and that he may well be its next victim.

Echoes of Extinction begins with a quirky, compact tale set on a spaceship bound for the dead planet Orriv. 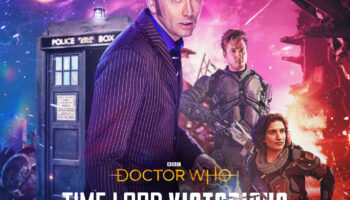 The Doctor is travelling alone, after the main events of the Time Lord Victorious storyline. When he materialises the TARDIS on board a small ship, he finds a crew of three bound for the planet. Rather than a rescue team, he discovers they are scavengers – hoping to make a killing by gaining possession of whatever wiped out the population.

This is a cleverly constructed piece and the titular echoes adding an extra dimension to the story. It can be enjoyed without any deep knowledge of the rest of Time Lord Victorious too.

Across the two parts, Torchwood’s Burn Gorman plays the monster and clearly has a ball with a part. He is unrecognisable, giving a guttural voice to the killer “Network”. More recognisable is Arthur Darvill who plays the not-so-bright Cooke. Appropriately enough, his performance here reminded us of his superb Long John Silver for the National Theatre, though without the menace. In the wider guest cast, Inès de Clercq and Mina Anwar entertain as the scavenging captain Frye and pilot Joshi. We also adored Paul Clayton as the fussy Edwards.

Despite the neat double-sided gimmick, Alife Shaw’s tale is really one whole story which resolves relatively simply. However, it provides an effective coda to the Time Lord Victorious saga; the Tenth Doctor reflects on the ordeals his former self has coming: the Koturruh, the Time War and the misery it will bring him.

Doctor Who – Time Lord Victorious: Echoes of Extinction is available on download from Big Finish.