Torchwood: Sonny offers another outing for the redoubtable Rhys Williams, the long-suffering husband of Gwen Cooper.

Like Tom Price’s Andy Davidson, Rhys is a series everyman who has benefitted from the extra space audio provides; we have heard him paired with other characters and on his own. Here, he’s teamed with his mother Brenda (television legend Nerys Hughes), who first appeared onscreen in season two’s ‘Something Borrowed’.

For ‘Sonny’, Rhys mixes the professional with the personal when he involves his mother in an investigation. At Gwen’s behest, the pair trial a new AI driven robot which is being deployed as companions for the elderly. With Brenda enjoying a week’s respite in a care home, she’s assigned a “Sonny” robot to engage with. As Rhys comes and goes, he attempts to assess any potential threat. 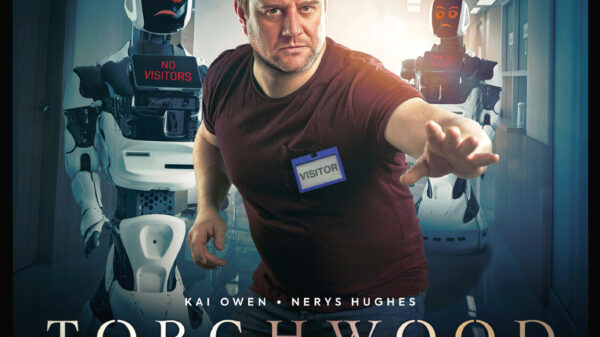 While Rhys and Brenda start out just playing at this, tensions soon arise. Guilt surfaces as well as feelings of abandonment for the residents. It is not a deep dive by any means, but with some life experience in this area, we certainly felt the themes of the story ring true.

Suspicious AI is always fertile territory for science fiction and writer Lizzie Hopley explores the idea from an unusual angle. Director Lisa Bowerman maintains the tension by keeping actor Steven Kynman’s performance as Sonny relatively neutral; in truth, we project our own feelings, and the story plays on our fears.

Kai Owen and Nerys Hughes are both excellent and we found it easy to invest in their strained relationship. In the wider cast, Donna Berlin is a joy as the straight-talking Joy – the put-upon manageress of the care home.

‘Sonny’ is another engaging slice of Torchwood. While it has smaller stakes than some stories, it prompts grown up questions. In terms of household chores and repetitive or dangerous tasks, technological assistance can be useful – but such assistance highlights our deficiencies too. Are there some areas of our lives which demand a genuine human interaction, regardless of the cost?

Torchwood: Sonny is available on CD and download from Big Finish.