The former Doctor Who and Victoria actress dispenses gifts with a suspiciously TARDIS-like bag.

‘Tis the season for the big brands to push their festive wares with tinsel themed adverts. This year, Boots have enlisted Jenna Coleman to front their ‘Bags of Joy’ campaign in a three-minute short film.

Jenna stars as ‘Joy’, whose capacious bag grants her the ability to deliver perfect gifts to her friends and family. Plus a random snowman.

It starts in Joy’s bedroom as she gets ready for a festive night out and discovers the magical power of the bag, a gift from her Nan with the note ‘This is what Christmas feels like’…

Speaking about the film, Jenna said: “I love Christmas and I’ve always loved Christmas films. Working on ‘bags of Joy’ with Tom, and the beautiful imagination he brought, creating this magical little film felt really special. Celebrating family, togetherness and the simple joy of giving mixed with a healthy dose of festive magic and charm felt so poignant this year. I hope people enjoy watching it as much as we did making it.” 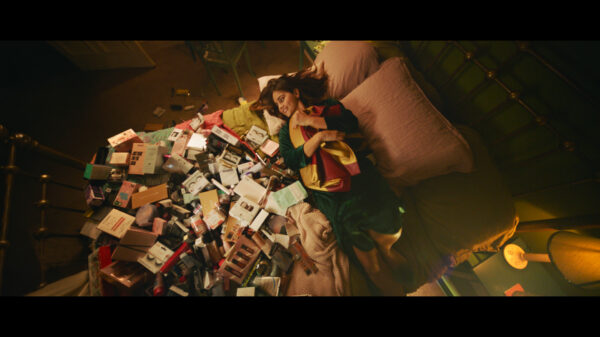 ‘Bags of Joy’ has been directed by Tom Hooper (The King’s Speech, His Dark Materials), with Boots hoping that “The story of Joy and her Nan embodies the spirit of a family Christmas and represents what many families will be doing this year, making heart-warming memories worth cherishing after a year apart in 2020.”

Sandman and The War Rooms

After playing conman and murderer Charles Sobhraj’s accomplice girlfriend Marie-Andrée Leclerc in The Serpent at the start of the year, Jenna Coleman has booked a role in the upcoming adaptation of Neil Gaiman’s Sandman, playing the role of Joanna Constantine.

She’s also leading the cast of The War Rooms, playing Joan Bright, the woman who ran Winston Churchill’s secret Whitehall bunker. A former girlfriend of Bond author Ian Fleming, Bright is thought to have inspired the character of Moneypenny; Her memoir The Inner Circle: A View of War at the Top has been optioned for the show on which Jenna Coleman will executive produce.

Of course, Jenna Coleman’s not the only cult star to lend their talents to a festive advert this year. A certain Spider-Man has become the voice of Marks and Spencer’s Percy Pig, in a promo with Dawn French. For the uninitiated, the Percy Pig range covers sweets, cakes and all manner of goodies. He’s never spoken before however, so this might be the start of a long-running gig for Holland. Handy if the web-slinging work dries up!