Spooks star Peter Firth has revealed that the spy drama’s new spin-off movie is “the same deal [as the TV show] but bigger”.

Spooks: The Greater Good arrives in UK cinemas on 8 May 2015.

Firth, who appeared in every episode of BBC One’s long-running drama series, is back as MI5 chief Harry Pearce in the film, alongside Sherlock star Lara Pulver as Season 10’s Erin Watts, Tim McInnerny as Oliver Mace and Hugh Simon as Malcolm Wynn-Jones.

The 61-year-old actor teased: “We set a benchmark with the TV show. I think we created a new level of TV drama and we are hopeful to do this for this film. So it’s the same deal but bigger.”

He added: “We’ve worked really hard to make the transition and not to emulate anything that’s out there. There are some obvious comparisons of the same genre in this country, but we’re not going there. We’re very happy with it and we’re excited to show it to everyone.” 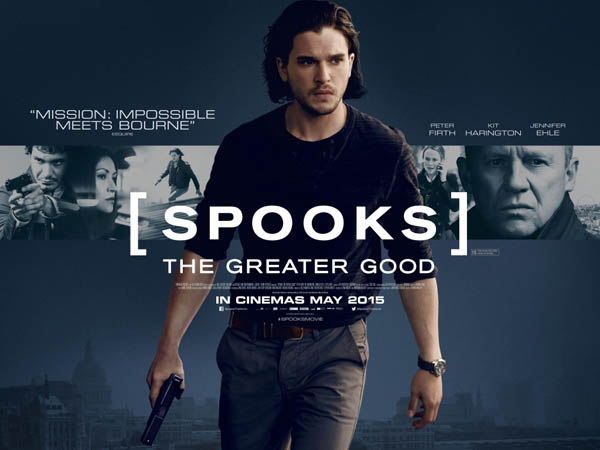 On working with co-star Kit Harington, Firth commented: “He’s great, Kit. I’m very happy for him because this should be his move up to the big screen.”

The official synopsis reads: “When charismatic terrorist Adam Qasim (Elyes Gabel) escapes from MI5 custody during a high profile handover, the legendary Harry Pearce (Peter Firth), Head of Counter-terrorism, is blamed. Disgraced and forced to resign, no-one’s surprised when Harry disappears one night off a bridge into the Thames…

“With MI5 on its knees in the wake of the Qasim debacle and facing controversial reform, former agent Will Holloway (Kit Harington) is brought back from Moscow to uncover the truth they feared – Harry’s still alive. He’s gone rogue, and needs Will’s help.

“As Qasim prepares his devastating attack on the heart of MI5 in London, Will must decide whether to turn Harry in – or risk everything by trusting the damaged, dangerous master spy who has already betrayed him once before…”