The grown up superheroes show is finally back in June.

Prime TV has announced that the third season of The Boys is landing in a few months. In characteristic style, the news dropped as part of the in-universe Vought News Network (VNN) digital video series Seven on 7 with Cameron Coleman.

If you haven’t time for the whole eight minutes, there’s a zippier ‘first look’ clip here too:

For the uninitiated, The Boys is an irreverent take on the genre. In a world where superheroes are as popular as celebrities, as influential as politicians, and as revered as gods, those with powers abuse them rather than using them for good. Intent on stopping them The Boys, a vigilante group, attempt to expose the truth about The Seven and Vought—the multibillion-dollar conglomerate that manages the superheroes and covers up their dirty secrets.

The show, which has already spawned a live-action spinoff and an animated anthology series, is based on the comic book series by written Garth Ennis and Darick Robertson. 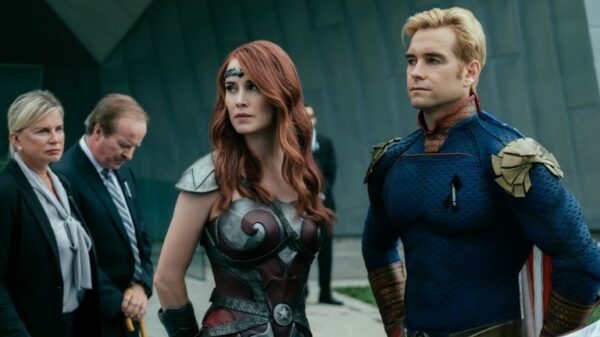 As the video teases, the upcoming run may include storylines connected to include former Payback member Crimson Countess launching a chimpanzee sanctuary, a reality show to fill the two open slots on The Seven and Homelander’s ongoing apology tour for dating a Nazi. That’s in addition to Herogasm, which will doubtless be as debauched as it sounds!

The Boys Season 3 will launch worldwide on Prime TV with three episodes on Friday the 3rd of June.

Five further episodes will drop on Fridays, leading to the season finale on the 8th of July.