Big Finish play with the War Doctor concept in their Unbound range… but have they the right?

The multiverse is all the rage these days thanks to Marvel’s high-profile What If? concept. Of course, alternate dimensions and altered chronologies are nothing new for Doctor Who, from 1970’s ‘Inferno’ to the mixed up Earth of ‘The Wedding of River Song’. They do often seem to involve eye-patches for some reason.

Alternate Doctors are a rarity though. Big Finish first embraced the idea in 2003, casting six new ‘Unbound’ incarnations. Though the series we saw familiar events remixed and even (gasp) a female Doctor. One of them, played by David Warner, proved to have legs. He has since teamed up with Bernice Summerfield and crossed into regular continuity for a series of boxsets.

Of course, we could argue that the ultimate What If? was the introduction of John Hurt’s War Doctor. Slotted in between Paul McGann and Christopher Eccleston, it provided us with a new take on the central character: a version of the Doctor prepared to take up arms against the Daleks in their war against his own people.

In 1975, ‘Genesis of the Daleks’ and its pivotal “Have I that right?” scene presented Tom Baker’s Doctor with the ultimate moral dilemma; sent back in time, his mission was to avert the creation of the Daleks, or at least discern some weakness.

At one point, a moment presents itself where he can destroy the incubating mutants. However, he wavers, weighing up the good that comes from opposing such evil. But what if he’d made the other choice?

Doctor of War: Genesis begins with a pitch-perfect recreation of that very moment before it diverges. Tom Baker reprises his role as the Fourth Doctor, with Sadie Miller as Sarah and Christopher Naylor playing Harry. 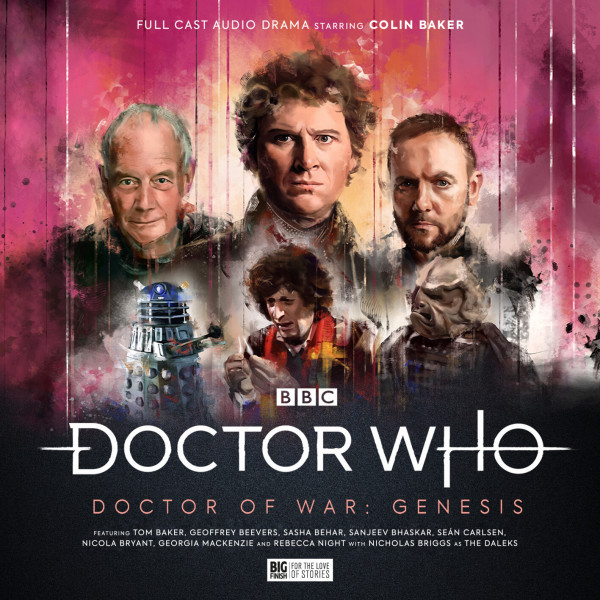 However, in the aftermath of touching those two wires together, events don’t go the Doctor’s way. Not only are his companions killed, but he is shot by a Dalek too. Rescued by the CIA’s Narvin (Seán Carlsen), he is offered a second chance and becomes the Warrior.

It is not as simple as that though, as the creation of the Warrior appears to have damaged time irreparably; there are multiple Doctors abroad, one of whom seems to be our familiar iteration travelling with Peri. Meanwhile, there’s an entirely different Miss Brown in the mix too.

After the twist on the familiar at the start, John Dorney’ story explores an utterly changed universe; rife with nods to Terry Nation, some of the action takes place on Aridius (‘The Chase’).

The second story, by Lou Morgan, looks at the consequences of the Doctor’s actions in a specific way – he finds himself on trial, on Skaro. However, it is not the planet we remember – that pre-emptive attack on the Daleks caused both races to unify and with a time ring left in play, the ensuing empire has becomes the universe’s dominant force.

‘Aftershocks’ is a complex non-linear tale, involving not just this altered Doctor but the Master too. Pleasingly, he is voiced by Geoffrey Beevers in a pre-‘crispy’ form – we know it’s all audio, but it’s fun nonetheless to hear this alternate take. Even when the temporal nature of the plot had us bamboozled, the interplay between Beevers and Colin Baker was delightful.

James Kettle’s tale seems a far more straightforward affair in comparison, though no less engaging. Set on Gallifrey, with the Warrior now a despotic Lord President, it introduces us alternate takes on both Romana (Rebecca Night) and Borusa (Sanjeev Baskar). The former never left Gallifrey and enjoyed the Doctor’s influence, while the latter is the Warrior president’s right hand man.

With a neat framing narrative, which sees Romana relate events to the villain of the piece, we learn of her work in the Difference Office. They are tasked with tracking down paradoxes – these days often created by Time Lords seeking to undo the horrors of the war they are responsible for.

Drawing its influences from a couple of Fourth Doctor tales – ‘The Invasion of Time’ and ‘The Android Invasion’ – this is a fun tale which blends familiar elements in a fresh way.

It is always fun to hear Colin Baker let loose. Here, as the Warrior, he gets to be resolute and imperious, then furious and frustrated – his Doctor without the saving graces of morality and humour that we are so used to.

Doctor of War: Genesis is an engaging boxset for those plugged in to the comings and goings of Doctor Who continuity. It is doubtless a tougher listen for those who do not have a good handle on the original stories. However, Big Finish know their fanbase – and surely that is the whole point of the ‘Unbound’ concept? The pleasure comes from distorting the familiar and exploring the consequences in that new reality.

As for what’s going on overall? We imagine hearing the second volume will prompt a re-listen of the first to join some of the dots. Doctor of War 2: Destiny, lands in September and promises appearances for both Leela (Louise Jameson) and Davros (Terry Molloy).

Doctor of War: Genesis is available on Collector’s Edition CD and digital download from Big Finish.