Despite strong fan opinions voiced on the new paradigm Daleks, we’re sure most would agree that Ian McNiece’s role as Winston Churchill in 2010’s ‘Victory of the Daleks’ was a triumph.

Shrewdly positioned as a long-time friend of the Doctor, the door was thrown open for further adventures before and after. Picking up the baton, Big Finish present four tales set across the New Series era of Doctor Who, with McNiece reprising his role, narrating in character and providing the voice of the Doctor.

‘The Oncoming Storm’, set at the outbreak of WWII, concerns the fate of a mysterious alien stone. While Churchill, merely First Lord of the Admiralty, is keen to discover its properties, it has also aroused the interest of a strange, robotic soldier who seeks tries to use Winston’s new secretary Hetty Warner to discover its location.

Ripping along at a fair pace, and with a cameo from writer Phil Mulyrne, a taciturn Ninth Doctor remains in the background for the most part, and is really only provoked into action towards the end, when lives are at stake.

Hetty initiates the Tenth Doctor encounter when she fears for Churchill’s mental health, writing to the Time Lord and inadvertently arousing the interest of other parties. Alan Barnes ‘The Hounded’ gives form to Churchill’s metaphorical black dog, the term he used to describe his bouts of depression, with a dangerous physical manifestation of the beast.

Across the first two stories, Emily Atack (The Inbetweeners, Dad’s Army) makes a great impression as the spirited Hetty, a northern lass who gives as good as she gets and not is afraid to rise to the challenge.

The third story ‘Living History’ can be placed precisely, as it involves the Eleventh Doctor travelling with the young Kazran Sardick (Danny Horn) from ‘A Christmas Carol’. On his first TARDIS trip, Winston becomes stranded with Kazran in ancient Briton, in the midst of a Roman invasion.

Writer Justin Richards gloriously nests one ‘celebrity historical’ inside another, having Churchill encounter Julius Caesar as well as dealing with the threat of a stranded Dalek. It is a testament to the strength of the production that the Doctor is barely missed, with Horn and McNiece providing an engaging double-act in what we feel is the strongest of the four tales. 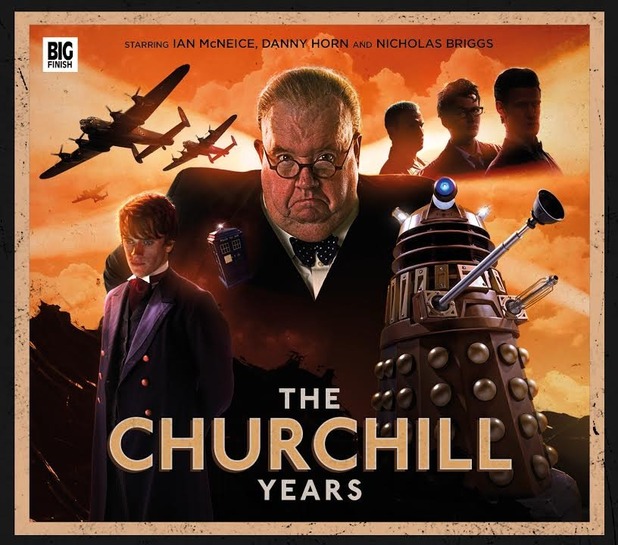 ‘The Chartwell Metamorphosis’, from director Ken Bentley, concludes the set with an aged and incredibly grumpy Churchill. As an alien threat emerges in his butterfly house, it appears that Winston has let his vanity get the better of him. Luckily his nurse is Lily Arwell (Holly Earl) from ‘The Doctor, the Widow and the Wardrobe’, placed by the Doctor to keep an eye on his old friend.

These tales are hugely enjoyable and it is clear that Ian McNiece’s characterisation of Churchill has plenty more mileage in him. The returning cast from the Matt Smith era, Danny Horn and Holly Earl, are well used and help sell the stories even with minimal Doctor involvement. There is also a certain thrill in hearing more recent versions of the Doctor Who theme before a Big Finish drama – something we will gladly get used to!

With a second volume hinted at on box set extras, we can’t help but wonder if we might hear some encounters with classic series Doctors too; or even a tale with the most recent addition to the Big Finish fold in person?

Released in January 2016 by Big Finish.