In their second box set release for Big Finish, Kate Stewart, Osgood and the team take on fearsome assassins and a hard-nosed businesswoman, set on profiting from salvaged alien technology.

As before, this Doctor Who box set comprises a four-part story shared between two writers; Andrew Smith handles the middle two episodes while Matt Fitton opens and closes the tale.

‘Power Cell’ finds Kate crossing swords with Felicity Lyme who, thanks to private investment in the education sector, has her hands on some of UNIT’s advanced technology. The story is a tense political thriller, with Osgood realising that she may well be the link to a trail of missing scientists.

Fearing a Government leak, Kate pulls on the UNIT’s international resources for ‘Death in Geneva’. Often referred to in the series, it was fun to actually visit the Swiss city, especially as it offered some high octane action with cable cars and paragliders, as well as a tremendous cliff-hanger ending!

Back in Blighty for ‘The Battle of the Tower’, the full force of the alien threat is revealed when Tengobushi forces attack UNIT’s London headquarters and Captain Josh Carter comes to the fore as an epic battle plays out.

As well as some well-researched action, there were some great gags and we loved the revelation that the Yeoman Warders are on the UNIT payroll too. Also, there was a pleasing shout out to Malcolm from ‘Planet of the Dead too’ who was busy maintaining the Tower’s public image. 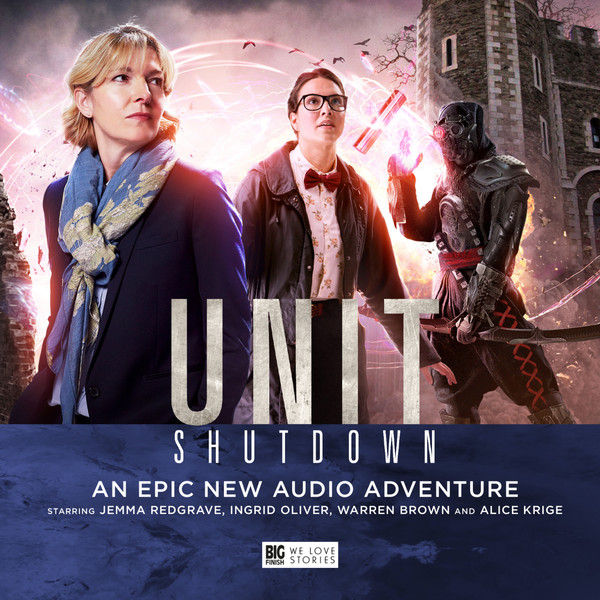 Finally, ‘Ice Station Alpha’ brings the team face to face with Lyme Industries’ grand scheme in the Antarctic. Bringing in international trouble-shooter Lt Sam Bishop (Warren Brown), the team find themselves up against the Tengobushi and their Masters as well as Felicity Lyme’s force of hired guns.

Across the set, we enjoyed the further development of the characters, with Osgood (Ingrid Oliver) seeing glimmers of a personal life, and Captain Josh Carter (James Joyce) putting his increased strength to good use.

With the Silence promised for a third season, it seems appropriate that Big Finish have created their own monsters this time and the Tengobushi certainly pose an impressive threat. As another caste of Kamishi, first heard of in ‘The Diary of River Song’, they also nod towards the wider Doctor Who universe.

While perhaps less of an obvious global threat than ‘UNIT: Extinction’, ‘Shutdown’ offers a very intelligent story, with immersive sound design, a terrifically punchy soundtrack and an international feel – full of action and adventure without losing sight of its Doctor Who roots.