Starting as a companion, the 26th century archaeologist survived as the star after the BBC took the Doctor Who book rights back in house. Later she gained her own audio adventures, where actress Lisa Bowerman brought the character to life at Big Finish.

Recently reunited with the Seventh Doctor and Ace, ‘The Triumph of Sutekh’ is the second New Adventures box-set for Benny, which sets her on an equal billing with the Doctor. Reviving an enduringly popular classic villain, these four stories see our heroes battle the titular Sutekh the Destroyer, a powerful alien who personifies a dangerous the Egyptian god.

The tale begins with Guy Adams’ ‘The Pyramid of Sutekh’, as Benny investigates a pyramid on the planet’s surface and finds herself encountering the Doctor, already locked in a mental battle. Through claustrophobic scenes, we get reacquainted with Sutekh and his methods, as well as having some fun with elements from the original Tom Baker tale.

Justin Richards’ ‘The Vaults of Osiris’ shifts the tone to action-adventure as Benny and Ace find themselves on the trail of stolen artefacts from Egypt to Switzerland and a mysterious bank vault.

The third story, ‘The Eye of Horus’, Benny finds herself back in ancient Egypt, where James Goss spins the tale of a confident female Pharaoh and her rather familiar physician, drawing on real historical evidence. Hatshepsut (Sakuntala Ramanee) is successful and well regarded but her step-son Tutmosis, the rightful heir, becomes restless when he listens to the insidious words of a certain ancient, restless God in the desert.

Finally, Una McCormack’s ‘The Tears of Isis’ concludes the set with the off-beat tale of an end of the world cult who are rather baffled when their apocalyptic prophecies come true and their God arrives. 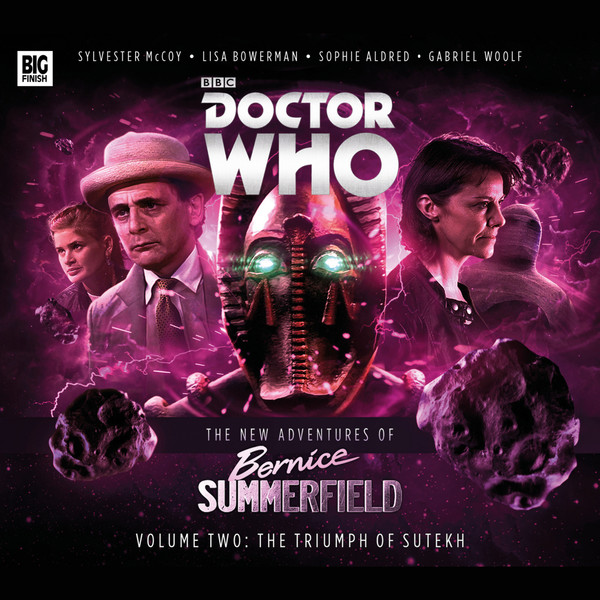 Given his popularity, it is a wonder that Big Finish have not returned to Sutekh before. Gabriel Woolf, who also voiced the Beast in ‘The Impossible Planet’/’The Satan Pit’, has lost none of his persuasive, hypnotic power and is given ample opportunity to terrify here, In fact, he has far more to do than in ‘The Pyramids of Mars’.

Benny remains a fallible, likeable central character and Lisa Bowerman ensures she is never less than entertaining. Ably supported by Sylvester McCoy and Sophie Aldred, we look forward to further New Adventures with this team, which keep alive the spirit of those years where the show not only survived but thrived in prose.

Extras: A fifth disc contains an entertaining set of interviews with cast and crew.