Welcome to Classic Doctors New Monsters 3: The Stuff of Nightmares.

“There are some corners of the universe which have bred the most terrible things! Things which act against everything we believe in. They must be fought!” So said the Second Doctor.

While his monstrous foes often only make a single onscreen appearance, we often find the Doctor is already familiar with them. That’s where Classic Doctors New Monsters comes in. We’ve enjoyed volumes 1 and 2, so how does the latest measure up? 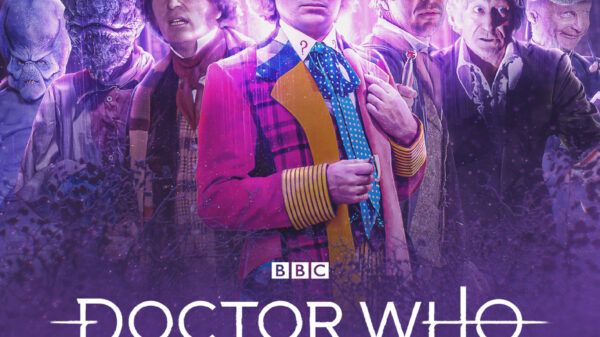 Classic Doctors New Monsters 3: The Stuff of Nightmares brings us a Balhoon brother, a Tivolian on holiday and two encounters with the insidious Kantrofarri.

The House That Hoxx Built

First up, writer Tim Foley provides a terrific haunted house story in the Earth’s far future; we are in the era of the year five billion, as frequented early-on in the new series. However, it’s the Third Doctor and Sarah Jane Smith arriving on the remnants of Earth, making good on the reference to Galactic Heritage in ‘The End of the World’.

This particular house is the creation of the Hoxx of Balhoon (Dan Starkey), brother to the ill-fated Moxx and an ardent history buff. Cue a good deal of humour from misunderstandings of Earth terminology, akin to Mr Copper in ‘Voyage of the Damned’.

While Rose suffered culture shock on her first futuristic visit, Sarah takes Digi-Humans, The Hoxx and his ovine ward in her stride. Sadie Miller’s performance is remarkable, as she recreates Sarah’s journalistic nose for a story. She’s nicely paired with Francesca (Ozioma Whenu) too, who brings dignity to what could be a purely comic part.

This is an engaging tale, drawing on the world building of RTD but still feeling true to the Pertwee era. There’s a pleasing bit of nominative determinism too – who can resist a butler named Butler?

The Tivolian Who Knew Too Much

A case of mistaken identity disrupts off the Fourth Doctor’s roman holiday, as writer Robert Valentine brings us a charming knockabout story which plays on our preconceptions of the Tivoli race.

With Leela abducted, the Doctor is paired with the incredibly timid Timble Feebus. Onscreen, we have found the cowardly Tivoli (who first appeared in ‘The God Complex’)  pretty annoying. Here, Robert Daws gives us an example of their species who is actually rather endearing and in contact with his therapist too.

As always, Tom Baker’s Fourth Doctor and Louise Jameson’s Leela make a brilliant combination. Channelling The 39 Steps and any number of mobster films, this tale that feels like it could have come straight out of the Graham Williams era.

Together In Eclectic Dreams

Roy Gill brings us the first of two encounters with the Dream Crabs of ‘Last Christmas’. The Sixth Doctor and companion Mari Yoshida arrive seeing medical assistance as she is plagued with nightmares. They’re at the Archipelago of High Dream. Or is it the Lethe Foundation, a medical facility run by musician Tara (Rebecca Front)?

With nested layers of dreams, this is the more conventional of the boxset’s two Kantrofarri stories. However, that’s by no means a criticism – it is full of surprises. For her part, Susan Hingley’s Mari is another spirited addition to Old Sixie’s growing roster of companions.

We’re being deliberately vague about the story so as not to spoil; suffice to say it is the highlight of the set. It also deserves some sort of award for that title too!

If I Should Die Before I Wake

The final tale, written by John Dorney (from a story by Jacqueline Rayner) and takes us into the realms of Greek mythology. With a different spin on dreams, the tale follows the spirited Charlie Pollard (India Fisher) as she refuses to give in to the narrating Doctor’s suggestions, despite his patient efforts. Paul McGann plays the narrator’s role perfectly (as fans of his historical podcasts will attest, he has the perfect voice for such things).

With its meta structure, the story’s strength rests on the listener’s levels of affection for Charley. It probably could not be told with just any Doctor and companion pairing, but the Eighth and Charley have always been a bit special, haven’t they?

With a futuristic haunted house, engaging mobster antics in 1970s Rome and two battles with those sinister Dream Crabs, this is another dreamy combination of Classic Doctors and New Monsters. We are thrilled that this series returned (it had been five years) and always particularly enjoy the extras; director Barnaby Edwards is such an eloquent enthusiast for the stories he helms.

Doctor Who: Classic Doctors New Monsters 3: The Stuff of Nightmares is available on CD and download from Big Finish.

With this set out in the wild, Big Finish have already released details for Classic Doctors New Monsters 4. Subtitled Broken Memories, it sees stories featuring the Clockwork Droids, Harmony Shoal and a double dose of The Silence. The Doctors involved are the Fourth, Sixth, Seventh and Eight – although we don’t yet know who faces which threat.

There is a bit of a wait though – Classic Doctors New Monsters 4: Broken Memories is scheduled for October 2023.