Gallifrey: Time War 4 concludes the current storyline for Gallifrey. With Romana lost and Leela returned, former CIA operative Narvin remains an outcast from his home; the planet of the Time Lords now firmly gripped by the resurrected Rassilon.

The legendary Time Lord has worn many guises, but perhaps never before that of the handsome leading man. Here, the self-styled Lord President Eternal is played by former Spooks and Lord of the Rings star Richard Armitage. No stranger to Big Finish, he was the lead in their 2018 adaptation of H.G. Wells’ The War of the Worlds. 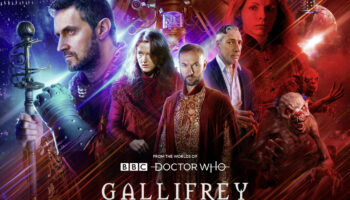 Following directly from Volume 3’s Unity, Lisa McMullin’s Deception finds Narvin, Leela and Rayo seeking the resistance. Comprised of renegade Time Lords and other races, this alliance has set itself against both sides of the war.

Adding a cast of resistance characters, including Samuel Gosrani’s Eris, we follow Leela and discover Rassilon’s latest weapon; disorientating ‘deception fields’ with which he has mined the vortex. We see the conflict from the other side too, reintroducing Gallifrey’s Prime Minister Livia and Cardinal Mantus; at odds with each other, they also have to handle Rassilon’s shifting moods.

As the lead character here, Leela is granted a chance to show her fortitude. Louise Jameson reminds us of her character’s wealth of experience, as well as leaving us in no doubt of visceral terrors contained within Rassilon’s traps. In the soundscape, we loved the shifting temporal echoes of the deception fields, which were both terrifying and mesmeric.

Lou Morgan’s Dissolution spools back to follow Narvin and Rayo. Narrowly escaping a Dalek ambush, Narvin allows his TARDIS to choose their destination telepathically; the pair end up at the spiritual retreat of his Time Lord chapter. In an all too brief respite, Rayo recovers from his injuries and Narvin reluctantly faces some home truths.

We adored the performance of guest star Anna Carteret (Juliet Bravo) as the Apothecary; a mentor for whom Narvin has little time despite her judicious insights. We also enjoyed the scenes with Rayo discovering the simple delights of home-grown food. As the background menace of the story, Nicholas Briggs again does sterling work re-establishing the nature of the divine Dalek threat.

Missing since Volume 1, sometime ally Braxiatel (Miles Richardson) returns to save Romana from extermination in the nick of time. Left on Unity, a stranger to herself, she had fallen foul of the Daleks. What follows is a quest, skilfully penned by David Llewellyn, as the pair travel though deeper and deeper levels of a temporal anomaly in search of a devastating, potentially Time War ending weapon.

On their trail are the Ravenous, the Time Lord-hungry predators. Last seen in the conclusion of their eponymous Eighth Doctor series, they are fundamentally a sideshow. Beyond is at heart a character piece which explores Brax’s motivations and how far both he and Romana are prepared to go to end the war. Entertaining though this is, we did find it odd that extracted Romana from the narrative (when frankly, she was already), then returned her to much the same point for the finale.

Finally, Script Editor Matt Fitton draws all the players back to Gallifrey, where the Daleks are making a full assault. Under the command of their divine Emperor and with a new mode of transport at their disposal, their goal appears to be domination rather than destruction.

As the drama played out to its conclusion, we particularly enjoyed the interchanges between the Lord President Eternal and the divine Dalek Emperor; both see themselves with a divine right to dominion over the timelines and the other as a false god.

The challenge of this set was an inevitable one as we all know how the Time War ends. Despite their much-loved status, figures like Romana, Leela and Narvin needed to make their exits from the storyline prior to the Doctor’s conflict-ending actions. However, with Doctor Who, it is always as much about the journey as the destination. The set employs an interesting structure, presenting three contemporaneous stories which deliver our heroes to their fates in the finale, each with some exploration of their character along the way. Into positions which either extract them from the narrative or line them up for what we know is to come. No spoilers here, but this is all skilfully done.

That said, we cannot help but feel this set was rather disjointed; we have already mentioned Romana’s escape and recapture and the much-heralded star attraction of Richard Armitage was criminally underused. What we heard we liked: tremendously gravelly and charismatic, this Rassilon is clearly set to become Timothy Dalton’s maniacal, frothy despot of The End of Time.

Although Gallifrey appears to be over, for the moment at least, the Time War is far from done at Big Finish. The War Doctor Begins for a run of four boxsets in June and The War Master has a further outing scheduled. Plus, Paul McGann’s last The Eighth Doctor: Time War release ended with a killer cliff-hanger! Whether that means we might hear more from these characters remains to be seem. We can certainly imagine a boxset which draws a number of these elements together…

Gallifrey: Time War 4 is available to purchase, on download and CD, from Big Finish.