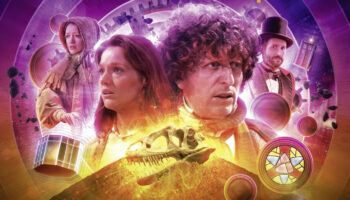 The Tribulations of Thadeus Nook

Writer Andrew Smith’s tale sees the Doctor on the trail of an unscrupulous time-traveller. Seeking to turn a profit, the titular Thadeus Nook is a cosmic wide-boy who offers “Time Tours”. When one such trip goes awry on the eve of D-Day, the Doctor decides that Nook’s irresponsible operation needs to be put out of business for the sake of the timelines. 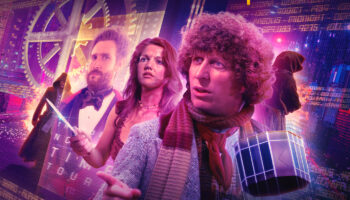 While the idea of one time machine following another put us in mind of The Chase, there is more happening here than simple comic hijinks, entertaining though they are. The tale pivots mid-way to reveal a substantive threat with temporal implications.

As Nook, Brendan Murphy is charismatic and engaging, residing somewhere on the scale between the Artful Dodger and Del Boy. We also enjoyed the affectionate relationship between Nook and his partner, Jess (Laura Riseborough). Georgina Hellier impressed as the headstrong time-tourist Flaia too.

Dorset’s famous Jurassic coast, 1830, is the setting for a celebrity historical romp. With dinosaurs, naturally. The Doctor has arrived to seek out the famed fossil hunter Mary Anning (Lucy Briggs-Owen). Not that she was famed at this point as, disregarded for her gender and low birth, others have taken credit for her work. 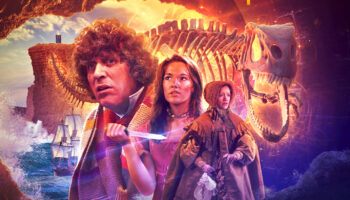 Writer Helen Goldwyn instantly builds a great rapport between Mary and Leela. The former impressed by Leela’s forthright manner and lack of regard for social niceties. She’s also intrigued, if wary, of the Doctor who is so markedly different from the usual visiting experts. Who else would attempt to hypnotise a crocodile with a flashlight?

The story deftly blends the monstrous with the maternal; we follow both the trail of a murderous beast with Mary and the fate of Charlotte Bate’s Lizzy. A maid to the local landowner, Lizzy is heavily pregnant and concerned for her inept, smuggler husband Jim (Joe Sims). We were fully invested in the fate of this young family and loved hearing Leela striving to keep them safe.

While Lucy Briggs-Owen gives a compelling performance as Mary Anning, whose eyes are opened to a wider universe, there is great support in the wider cast. Ian Conningham is superb as the misguided Dr Numan, with a characterisation that put us in mind of Michael Jayston’s Valeyard, and Alan David impressed as the ill-fated reptile collector Lord Macavoy too.

With its prehistoric monsters, The Primeval Design could not be further in tone from the comic shenanigans of Thadeus Nook, yet both are incredibly entertaining. As usual, director Nicholas Briggs maintains an authentic tone and Jamie Robertson’s sound design and score are pitch perfect. Again, the stories are presented with a pair of gorgeous Ryan Aplin covers.

Despite the increasing number of stories featuring the pair, with their Higgins/Doolittle relationship, the repartee between Tom Baker’s Doctor and Louise Jameson’s Leela continues to sparkle. Long may it continue!

Although a long wait begins for Series 12, due in early 2022, all is not lost. We look forward to a double-bill of Fourth Doctor Lost Stories in March, as well The Dalek Protocol in April; the latter a curtain raiser for the upcoming Tenth Doctor series Dalek Universe. Also in March, Tom Baker will again pop up as The Curator in the second volume of the Eighth Doctor series Stranded.

Doctor Who – The Fourth Doctor Adventures Series 10 Volume 2 is available on download and CD from Big Finish. Both stories are also available as individual downloads.