Lost Warriors is the third boxset of adventures for Christopher Eccleston’s Ninth Doctor.

As with Respond To All Calls before it, these are three discrete Doctor Who tales with a thematic link, rather than a three-parter like Ravagers. 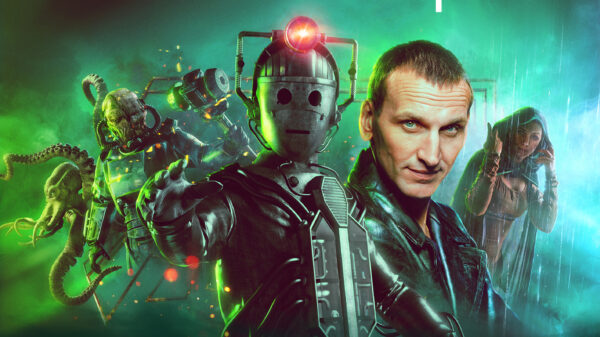 Once again travelling alone, the Doctor finds allies on his adventures — all of which are Earthbound this time…

Writer James Kettle lands the Doctor in 1936 at a well-to-do country house. With shades of Upstairs Downstairs, or Downton Abbey, we meet the aristocracy above and those who serve them below stairs. It comes as no surprise where this Doctor feels most at home!

As Lord Hawthorne (Alex Jennings) takes potshots at the locals, and his sadistic butler Mr Streatham (Don Gilét) administers brutal punishments to the staff, something is clearly amiss as Duberry House. Especially as those locals are actually aliens called the Fleshkin, and they have energy weapons against his twelve-bore shotgun… 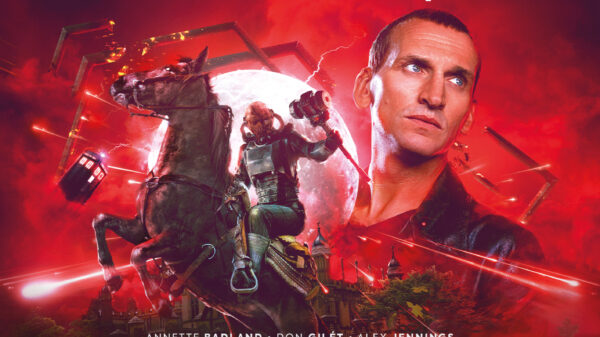 The Hunting Season is an absorbing tale of cultural misunderstanding with a neat meta-twist; while Mrs Goose (Annette Badland) reads her Western stories to the maid Alice, she provides a commentary on the Doctor’s actions. The story also addresses the romance of war, with Hawthorne’s daughter Isabel and her disturbing thirst for killing. We loved that the psychic paper presented the Doctor as a Brigadier, prompting the comment “That’s a first!” There’s also a moment where the Streatham calls the Doctor as “an ingenious coward” – it is a description he enjoys.

“Come you spirits, that tend on mortal thoughts.”

Celebrity historicals were a relatively new idea in 2005 but soon became a Doctor Who staple. In The Curse of Lady Macbeth, the well-known name comes from fiction, although the text which made her infamous was drawn from legend.

With her new husband away at war, Lady Macbeth, or Queen Gruach, holds her people together with the ancient ways. She is brave and noble, as much mother to her community as to her mute son (by her late husband, who Macbeth supplanted). Arriving while a spell is cast, the Doctor is taken for a mythical Blue Man and must work to earn Gruach’s trust with her people threatened. 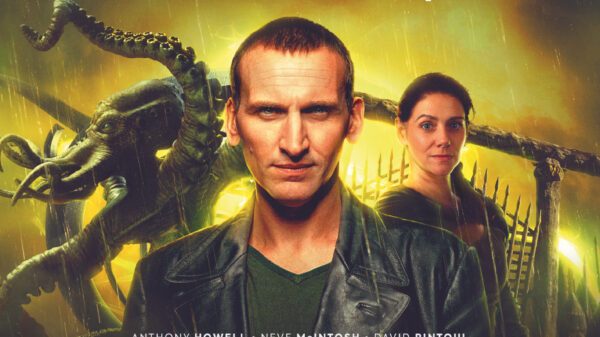 Neve McIntosh’s Gruach is a vivid, resilient character and Lizzie Hopley’s story delights in challenges the preconceptions we have courtesy of the “Scottish Play”; it is after all how we, and the Doctor, think we know her. Mixing regal responsibilities with personal tragedy makes for an engaging drama with plenty of heart.

In the wider cast, David Rintoul impresses as Kinade and, returning from battle, Anthony Howell is a surprising Macbeth.

Finally, Monsters in Metropolis brings us a tale of movie making. Writer John Dorney has penned an unashamed love letter to the influential Fritz Lang film Metropolis, with the conceit that the robotic Maria central character must be replaced by a Cyberman. It’s a great, easy to visualise idea which explores both the plight of the converted man and the political tensions of the time.

Set in Germany’s Weimar Republic, between the two World Wars, Lang (Nick Wilton) is a creative, if difficult, genius. His vision is kept on track by his capable assistant Anna Dreyfus (Helen Goldwyn) though the film is headed wildly over budget. However, neither expect the project to be imperilled by a particularly realistic looking machine man and its troubled owner Dieter Jovanovic (Peter Bankolé). 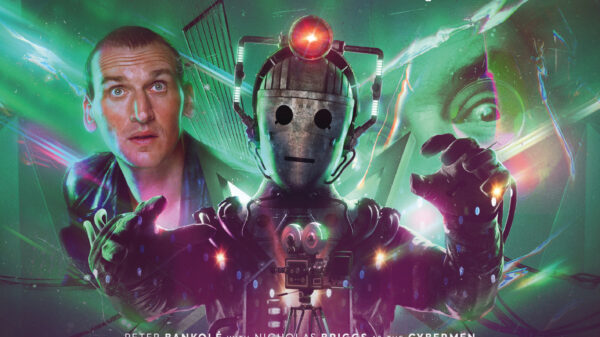 The script does not dwell on the reason for the Cyberman’s predicament and honestly, it matters little. Its presence provokes such strong imagery that any amount of technobabble handwaving would be an unnecessary distraction. This story has deeper aspirations and the machine man is a pawn in a wider game; the performance, by Nicholas Briggs, of the conflicted cyberman is incredibly affecting.

On a lighter note, we loved the Doctor’s enthusiasm for Lang’s work, recalling his fannish behaviour around Charles Dickens.

Barnaby Edwards directs a diverse and tremendously engaging set of stories and he clearly has an excellent ear for casting.

Christopher Eccleston’s Doctor suits the role of a wanderer; far from a lonely god, he’s a wide-eyed traveller who delights in helping where he can. Yet, ever present, is the shadow of his past deeds. Just as the Time War haunts this Doctor, so are the warriors of this set troubled; respective wartime experiences shape the lives of those who take part, as well as those who surround them.

While all three stories are entertaining, for us, The Curse of Lady Macbeth edges it as favourite – due in no small part to Neve McIntosh’s tremendous performance as the lady in question.

Next up for this first run of Ninth Doctor stories is Old Friends, which promises to be another fan pleaser; it contains a two-parter in which he meets the Brigadier.

Doctor Who: The Ninth Doctor Adventures Volume 3 – Lost Warriors is available on CD, download and Vinyl from Big Finish.