Torchwood: Gooseberry, the latest monthly release in the Torchwood audio range from Big Finish, brings back together the winning pairing of Owen and Andy for another high-stakes adventure.

It’s a character combination that’s often been the springboard for comedy. But there are fewer jokes in Gooseberry – an altogether darker affair, which turns renewed attention to the far less palatable aspects of Owen’s nature. Character flaws which sometimes get overlooked because of Owen’s talents as an analyst and investigator. Skills he’s able to put to good use, despite the handicap of still being dead.

Gooseberry is also a story full of disquieting observations about the way that people in relationships can manipulate their partner to extract the things they need. This story pivots on a challenging conundrum: if the person being used feels that they too benefit from the partnership, can that form of exploitation ever be morally defensible, even when it’s hidden from the victim?

What makes the situation much more poignant is that events begin with Andy’s delight that his moribund love-life is enjoying an unexpected uptick. This is all courtesy of the perky and lively Caite. Her interest in him is welcome validation for a Cardiff copper who’s usually left to his own devices, beavering away solo on the periphery of a bigger Torchwood case.

Quite naturally, Andy is hopeful that Owen and his new love will get along. But Owen immediately spots something amiss with Caite, and the pair are soon drawn into an ill-advised liaison of shared secrets and poor choices.

It’s long been clear that Owen can resist anything except temptation. This means that the loss of sensory pleasures that comes with being deceased is something that he’s found hard to endure. When Caite offers him a way to experience physical sensations once more, his elation is easy to understand. Those moments of intoxicating joy are one of the highlights of Burn Gorman’s emotionally adept performance.

It’s easy to empathise with Owen’s delight as he savours the tastes and stimuli within easy reach on the city’s streets. But even in life, Owen never mastered self-restraint. So it’s not surprising that his addictive personality traits soon surface and, with Caite in tow, he’s headed off down a deeply destructive path.

When Owen makes some terrible, fateful decisions his moral compass is left spinning. And as crimes and misdemeanours follow, Owen attempts to cover up the same incidents that Andy is actively investigating. This involves some very effective near-miss plotting in James Goss’ well crafted script, which follows the style of Coffee, rather than of Drive, The Three Monkeys and Dinner and a Show, in allowing the drama to unfold over days and weeks rather than in the few hours of a single action-packed night.

While this is very much Burn Gorman’s story, he’s ably backed by Tom Price (Andy Davison) and Lois Chimimba (Caite). Price makes good work of Andy’s delight at the novelty of “having a girlfried”. It’s a performance tinged with the underlying sense of pathos, as Andy is worries that this budding romance might is too good to last. Chimimba’s portrayal of Caite captures the sweetness and the toughness that represent the public and private sides of her nature. One of the things that keeps Caite’s condemnation of Owen in check is that she is herself engaged in questionable moral behaviour which sees her exploit others for her own advantage.

This is all very engaging stuff and, while the drama is infused with a sense of impending doom, Goss’ clever storytelling keeps things unpredictable to the last.

What makes the jeopardy work so well is that Owen and Caire are both culpable because of their own selfish behaviours. The outcome of this unusual ménage à trois rests on whether Owen, in the pursuit of pleasure, will betray his committment to his friend and to Torchwood’s mission. As the complexities of their predicament multiply, each of the three main players might come to see themselves as the “unwanted third person” of Gooseberry. 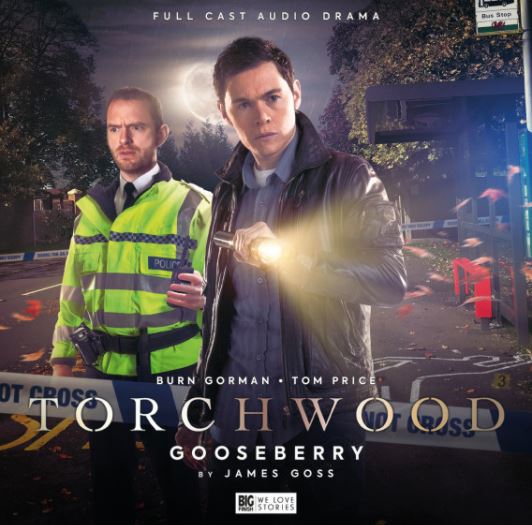 Torchwood: Gooseberry is available to buy, in CD and digital download formats, from the Big Finish site.