The Great Sontaran War brings one of Ianto’s oddest missions yet, assisting a member of the militaristic clone race. Tasked with a survey of Earth, Major Kreg is basing his operations at a Swansea caravan park. 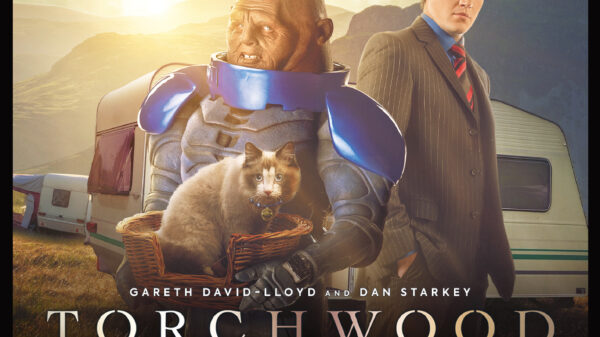 At Captain Jack’s behest, Ianto begins the tale escorting the Sontaran Major to a remote caravan park in the Mumbles. Disguised with a perception filter, the diminutive warmonger is on a mission to assess the Earth’s potential threat level.

With Ianto visiting occasionally, bringing supplies and advice, the Major is left to fend for himself. He begins to integrate with the community; the park also houses Mrs Betty Appleby and a contingent of foreign nationals working as fruit pickers. It is managed however by one Mr Higgins, an unpleasant man the Major amusingly deems as “most like a Sontaran”.

Throughout, the story attempts to humanise the Sontaran and his outsider’s perspective allow us to challenge and ridicule our societal norms. His main source of information is the internet – which is mainly full of cats and leads to the acquisition of a pet. There are also plenty of straight out gags, such as the assumption that the caravans are crashed shuttles and the fact that Ianto is mistaken for the Sontaran’s carer. Which he is to a certain point.

In Torchwood’s fifteenth year, this is another story where the connective tissue between spin-off and parent show is strong. Previous tales have included the Axons, the Fendahl, the Siltheen and the giant maggots from The Green Death. Here, Major Kreg is played by Dan Starkey, the principal onscreen Sontaran since 2007; best known as Strax, he also guested on The Sarah Jane Adventures so this role completes a Doctor Who trifecta. He grants this particular Sontaran a personality that sets him apart from the comic foolishness of Strax. Kreg is bright and seeks to understand, but always tries to interpret the world from his own viewpoint.

For Ianto’s part, a mention of Tosh roots the show somewhere within its first two seasons. Kreg clearly fills a hole in Ianto’s life, and the script suggests as much; Gareth David-Lloyd gives us a Torchwood coffee boy who is clearly unfulfilled and needs to be needed.

Director Lisa Bowerman assembles a strong cast around the pair. Kaye Brown is heart-breaking as the proud Mrs Betty Appleby. Nigel Harrison repulses as the petty and manipulative Higgins, while Farshid Rokey impresses as the decent Jamal.

This is a slow burn comic tale, less rib-tickling and more thought-provoking. It is doubtless not worth considering the real implications of embedding an alien warrior in human society, or indeed how this comes about. The setup is handled with such brevity and charm that we are inclined to go with it.

The story considers themes of isolation and finding one’s purpose, as well as taking a couple of broad swipes at the capitalist system; mercenary landlords and our ill-treatment of foreign labour are all in the firing line. Which is not to say this is heavy going, as writer James Goss manages all this with an enjoyably light touch.

The Great Sontaran War is another example of Torchwood flexing its format and doing something different. It is also clearly shot thought with a deep affection for the feline kind which even extends to the Extras; there’s a remarkably silly interview with the cover star of this release, the wonderfully named Group Marshall Cat.

Torchwood: The Great Sontaran War is available on CD and download from Big Finish.