Stephen Graham, Daniel Mays and Anna Maxwell Martin will all return for a third run of Code 404.

Boyed by the success of the first two series, Sky Comedy has commissioned another run of its very silly crime-fighting comedy. Set in the not-too-distant future, the show follows copper Roy Carver who has to deal with his reanimated partner, John Major, brought back by an experimental Artificial Intelligence project.

When one of SIU’s own is murdered, Major and Carver become hellbent on solving the case and proving their worth. But it’s bigger than they thought. Forensic psychologist Professor McAllister is brought in to work the case; but still the killer manages to evade capture and wreak havoc. Can they hunt the killer down before it’s too late? 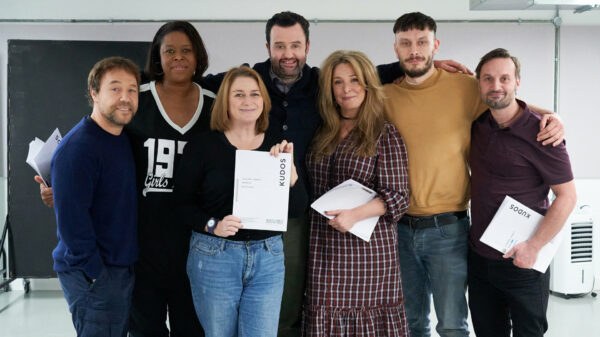 The new series will also introduce Vinette Robinson (Doctor Who: Rosa, The A Word) as Professor McAllister and Daniel Lawrence Taylor as journalist Searle.

Written by Daniel Peak and directed by Al Campbell, Code 404 is co-produced by Kudos, part of Banijay UK, and Water & Power Productions. The executive producers are Phil Temple, Tom Miller and Sam Myer.

The comic antics of Code 404 have apparently done well for Sky, with them proudly touting series 2 as “the biggest season launch in the history of the Sky Comedy channel”. Which sounds impressive, until you remember that Sky Comedy only launched in January 2020. Still, you’ve got to applaud their enthusiasm.

Apparently the show is their “fastest binged original comedy boxset ever” too. This we do find interesting, as an insight to the kind of viewing metrics they are keen on gathering.

If you’ve not had the pleasure, series 1 and 2 are available for catch up on Sky and Now. And here’s the S1 promo as a taster:

Naturally, when we get wind of an air-date for the new series, we’ll let you know…