Doctor Who audio producers Big Finish have kicked off their second series of Ninth Doctor audio adventures; Back to Earth brings the Doctor back to his favourite planet for three new stories.

The first series, which began with the three-part Ravagers last year, has seen him responding to emergency calls and encountering a Cyberman. In the final boxset, Old Friends it also ticked off a fan wish as this incarnation met his old UNIT ally, The Brigadier.

Building on that first run, this new release sees Christopher Eccleston’s tally of audio episodes now exceeding that of his thirteen onscreen appearances; by the end of this second series he’ll be up to twenty-four! 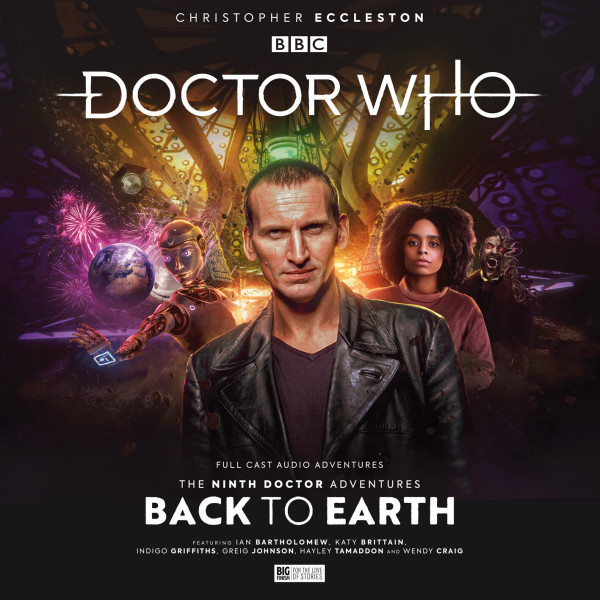 Time and again, the Doctor finds himself returning to his favourite planet. Dropping in on history or the present-day, whether it’s kings, commuters or ordinary people, he’s never met anyone who wasn’t important…

Station to Station by Robert Valentine

A deserted railway platform can be the loneliest place on Earth. But when Saffron is stranded at Underbridge station, she meets echoes of the past – and a fellow lost traveller. And the Doctor knows that something is hunting them…

The False Dimitry by Sarah Grochala

Moscow, 1605: the old Tsar is dead – but some blame unnatural forces. Perhaps the mysterious Doctor in the palace can help?

A successor advances on the Kremlin with an army, preparing the country for war. But Tsarevich Dimitry is not what he seems…

Every December, Mandy Litherland gathers the family at Foulds House to see in the New Year. Not everyone appreciates her efforts. At least the caretaker seems friendly – if a little weird.

“What’s struck me recently is the element of the Doctor stepping back and being a straight man for the various exotic personalities and creatures that come by.

The Doctor is there but other people take the stage. I like that ensemble feel. I liked it on television and I like it on the audios. You have actors coming in doing spectacular alien turns and your job as the Doctor and an actor is to support and encourage that.

I always connected with the Doctor’s love for humanity, even though he refers to them every so often as ‘stupid apes’. I think that was a very clever device to give this alien with two hearts a fascination and concern for the human race and their funny little customs. It’s interesting to play a character inside and outside the foibles of humanity.”

Doctor Who – The Ninth Doctor Adventures: Back to Earth is now available from Big Finish, on download, CD or Limited-Edition vinyl.

You can check out our review here.