Today is release day for a new Doctor Who adventure from former (and incoming) showrunner Russell T Davies. While he’s doubtless beavering away on what follows the Jodie Whittaker era however, this new tale was a lucky lockdown find.

Originally written as a spec script, ‘Mind of the Hodiac’ has laid dormant since the 1980s. Recently rediscovered, the story stars Colin Baker’s Sixth Doctor and Bonnie Langford as Melanie Bush.

In the depths of space, the mysterious Hodiac is manipulating the Galactic Stock Exchange to raise money. His aim? To hire mercenaries for a deadly quest across the stars.

Meanwhile, on Earth, an ordinary British family is plagued by a series of psychic events.

The one thing connecting these events is a magnificent patchwork coat –which just so happens to belong to the Doctor! 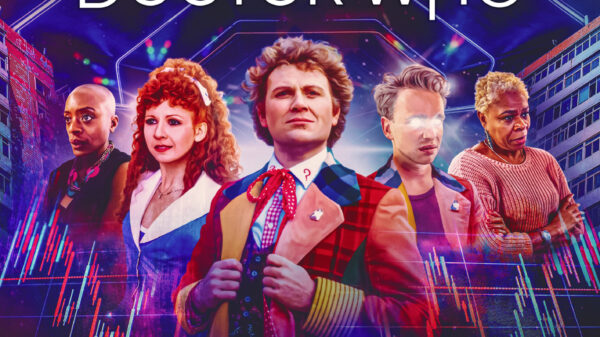 The story boasts an impressive guest cast, including Annette Badland, Luyanda Unati Lewis-Nyawo (Devs), T’Nia Miller (Years and Years) and Alexander Vlahos (Sandition). Laurie Kynaston stars as the villainous Hodiac and the story has been produced by Doctor Who: Lockdown! hero Emily Cook.

Talking about the story (in Doctor Who Magazine issue 574), RTD said:

“Who would have thought, as I sat there in that little flat in Roath in Cardiff, bashing away on an electric typewriter my mother had bought me for my 21st birthday…?

Obviously, I was writing it in the hope it would be made – and here we are, all these years later. This whole thing… it’s very strange that I’m coming back to Doctor Who [on television] at the same time, because none of this was planned. But it feels all as one. It feels like a whole. It feels like it was meant to be.”

Rediscovered as a full script for the first episode, with a synopsis for the second, the story has been completed in collaboration with writer/director Scott Handcock:

“I was actually quite nervous going into this project! I think both Russell and I had a panic about what if episode two wasn’t up to scratch? I’ve never been so nervous waiting for a response. Thankfully, however, he loved it. The great thing about working with Russell is he’s a collaborator so you’re always going to have a healthy back-and-forth even when he’s busy spinning 101 other plates.”

‘Mind of the Hodiac’ joins recent additions to the Doctor Who: The Lost Stories range at Big Finish which include ‘Return of the Cybermen’ and ‘The Doomsday Contract’.

It’s available now from the Big Finish website on both CD and download. We look forward to bringing you our review soon!