In a prerecorded panel for New York Comic Con which streamed on October 8, Jodie Whittaker, Mandip Gill and Bradley Walsh shared a few tidbits and two photos from the Doctor Who festive special, Revolution of the Daleks.

In the featured photo from the special above, Jodie Whittaker confirmed that it depicts the Doctor imprisoned “for a while”.

“Where we leave the Doctor… in the final episode of Season 12,” Whittker explained, “this explores in a way… one of the first times when the Doctor is away from the gang, and from the Doctor’s point of view, has no idea about what’s going on on Earth.”

Panel moderator Melanie McFarland added the Doctor “has a life sentence in a maximum security prison.”

MacFarland asked Jodie Whittaker what that means for a character with many reincarnations.

“We may discover that,” Jodie Whittaker hinted and considered before adding, “Or maybe we won’t.” 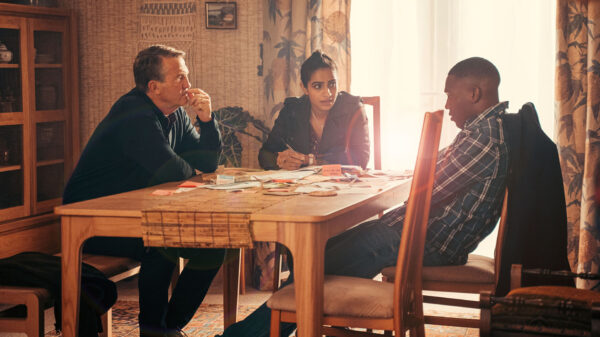 Mandip Gill explained the second of the two photos released, which shows the Doctor’s companions Graham, Yaz and Ryan at a table. The companions have learned a lot from the Doctor and now must attempt to face an alien threat without her.

“So basically we don’t know where the Doctor’s gone and we don’t know if we’re now in Sheffield forever and our journey with the Doctor is over,” Gill said of the photo. “So, I can speak for Yaz, she’s finding it very difficult probably not being able to say, ‘Goodbye,’ as well and not sure if and when she’s likely to see the Doctor and if she was just thrown back into a normal life without having a say. And so she’s struggling with the idea of not being on the TARDIS anymore but the picture that you see is Ryan, Graham and Yaz are sat around the table trying to figure out… basically they’ve come across a plot that involves a Dalek. We obviously know that’s…”

“From way, way, way back, by the way!,” Bradley Walsh interjected, with Gill agreeing.

Walsh’s comments suggest the Dalek is ancient, possibly the same ancient Dalek mutant from the previous festive special Resolution. The photo of the Dalek from filming of the special is very similar, but not identical, in design to the Resolution Dalek.

The NEW LOOK for the Daleks on full display in this new leaked image from location filming!
What do you think?? pic.twitter.com/YAVGhRKZCO

You will find more information about Revolution of the Daleks here.

As for Doctor Who Series 13, that remains on schedule to begin filming toward the end of 2020 as showrunner Chris Chibnall stated in Doctor Who Magazine 551 in April of 2020.

“We’re certainly in prep,” Jodie Whittaker assured at the time the panel was recorded. “So what we are all hoping for is for us to be filming before the close of 2020.”

“Listen, this is going to be an unbelievable series!,” Bradley Walsh exclaimed regarding the plans for Series 13 in which he was previously rumoured not to star. “An unbelievable year of titanic proportions.”

The Revolution of the Daleks air date was not revealed during the panel but McFarland reiterated that the special will air some time during the festive season this winter.

A little more behind the scenes goss for you: What that #DoctorWho #NYCCMetaverse panel leaves out is about, I kid you not, an hour of us snorting with laughter. Bradley is a huge joker and he kept on making us break.