In an interview in Doctor Who Magazine 575, executive producer Matt Strevens spoke of the Doctor Who BBC centenary special in which Jodie Whittaker’s thirteenth Doctor will regenerate.

“The final story is a massive, feature-length epic – it was huge to shoot – with lots of surprises for fans of all ages. Jodie gets a really good send-off. I think it will push everybody’s buttons. And the fact the BBC asked us for it to be part of their centenary celebrations – I think that just underlines the iconic nature of the show.”

The best pictures from the Cardiff park transformed into a Doctor Who film sethttps://t.co/2x2jf7bxbV pic.twitter.com/ZHLI2rBWSO

Stevens revealed to DWM the story behind the special request by BBC bosses to add a special to the production schedule.

“When they approached Chris, saying ‘We’d love you to do one more – we know the production schedule’s really tight, but what do you think about doing a special for the centenary of the BBC?’, it was a no-brainer.”

Strevens is excited for past and future showrunner Russell T Davies and Bad Wolf’s plans which will include a fourteenth Doctor.

“It meant a lot to Jodie to know that she would regenerate – it’s lovely to pass that on.”

Been to the #DoctorWho filming but they were packing up as I got there.

There was someone who they were very keen for us to not see leaving though. I saw a chair with ‘TOS’ visible on it too, so Ryan return as well as Graham? pic.twitter.com/42je9dXCLp

Written by Chris Chibnall and directed by Jamie Magnus Stone, The Doctor Who BBC Centenary Special will air in autumn of 2022.

Doctor Who Magazine 575 is available on newsstands and by digital issue on March 3. 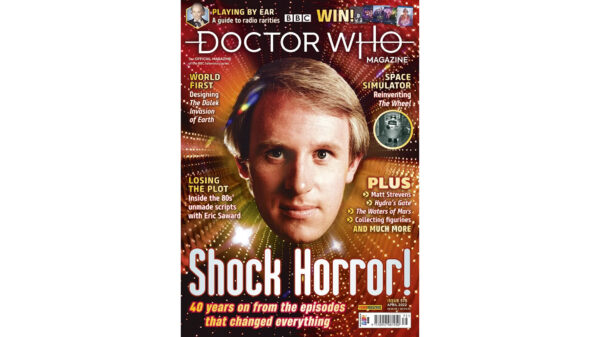