A Doctor Who film crew from production company Bad Wolf Ltd filmed a scene with David Tennant, Catherine Tate and Neil Patrick Harris for the first of two day shoots in the area of Broad Street in Bristol on 15 June.

Some very interesting set design happening on Broad Street this morning, transforming Chez Marcel crêperie into a toy shop called Mr Emporium. I have heard that Doctor Who is currently filming in Bristol but cannot confirm that this is a set for that show. pic.twitter.com/JiK0eBBuIU

Nearby there was an antique stall offering a plaque with “Toy Maker of the Year” on it.

It is speculated by many fans that Mr Emporium is a shop run by The Toymaker, also known as the Celestial Toymaker and the Crystal Guardian among other names, a character first portrayed by Michael Gough in the Season 3 episode The Celestial Toymaker. 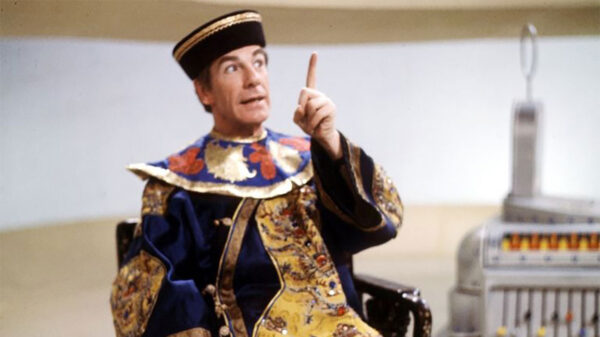 The Toymaker is a powerful being who ensnares sentient beings in seemingly childish games, with their freedom at stake. Within his realm, the Celestial Toyroom, the Toymaker commands immense powers. Though the games are always rigged in his favour, they are limited by his rules.

Fans believe that Neil Patrick Harris, recently announced as filming scenes set to air in 2023 as part of the show’s 60th anniversary and described by Russell T Davies as the “greatest enemy the Doctor has ever faced” is playing The Toymaker.

Posters, props, graffiti, UNIT (Unified Intelligence Taskforce) vehicles, Shaun Temple’s taxi and some damaged cars were also set up by the crew as part of the street set.

More set dressing for what looks like major scenes for Doctor Who being shot in the next few days around Clare Street. By the look of the name of that newspaper – the Bloomsbury Gazette – Bristol will be doubling for that there London. pic.twitter.com/CPabcD8PJg

There’s the one bit pic.twitter.com/O2HgVKXIkN

The word “FLUX” was written as graffiti, no doubt as a reference to the Doctor Who: Flux series.

Market stalls and graffiti are now in place for filming what is almost certainly Doctor Who on Clare Street and St Stephen’s Avenue pic.twitter.com/S7g9Os9Lxm

On 15 June, the filming occurred on Baldwin Street and Clare Street in the centre of Bristol.

An alleyway was strewn with debris.

#dwsr things are ramping up on Corn Street. Pyrotechnics set up behind the taxi (Fire Engine on standby) and the churchyard alleyway littered with debris. pic.twitter.com/GUULGXafdn

A car was set up as if it were on fire.

David Tennant spotted as Doctor Who films in the Old City pic.twitter.com/NLhoxN30tP

David Tennant showed up to rehearse, then film.

Welcome to Wednesday, or if you're in Bristol city centre today, DoctorWhoDay…
We'll be bringing you all the latest goings on from the filming of the nation's favourite time-travelling sci-fi TV show:
(If you spot something DM me or tag me in pix!) #dwsrhttps://t.co/8k58rdh4BU

Chaotic scenes with extras playing pedestrians randomly fighting each other were staged and filmed.

It's an exciting day for #DrWho fans as David Tennant is spotted in Bristol #dwsr https://t.co/3KkPcRAoRe

Bonus footage! Civilians seem to be attacking and threatening each other, whilst the doctor argues with a man in the middle of the street. #doctorwho #dwsr pic.twitter.com/9Ei83qaCvZ

So hyped to have been able to see this! I still don't think it's all sank in yet. I guess I can finally check off "Watch Doctor Who being filmed" off of my bucket list though! #dwsr pic.twitter.com/frn0O6ik6A

David Tennant’s Doctor was filmed attempting to reason with one of the rioters.

Neil Patrick Harris showed up dressed like a circus ringmaster. His character seemed to revel in the chaos and even briefly waylaid the Doctor for a dance.

It's actually @ActuallyNPH's birthday today, and here's how he's spending it – on the streets of Bristol as a #DoctorWho villain.
Fair play Neil Patrick Harris, happy birthday and welcome to Bristol
Latest #dwsr updates on this link 👇https://t.co/8k58rdh4BU pic.twitter.com/aYkHJ1vRzz

Some more behing the scenes of doctor who #dwsr #DoctorWho #Bristol #DrWho pic.twitter.com/lnHN4hOQMs

UNIT soldiers showed up to attempt to contain the chaos.

#DWSR
Apparently that's Catherine Tate in the pink and Bernard Cribbins in the wheelchair? Difficult to see though pic.twitter.com/KvPXZkJqfs

Neil Patrick Harris and Catherine Tate in character on set in Bristol during the filming of Dr Who @SWNS #drwho #drwhofilming #bristol #dwsr pic.twitter.com/sqnrGzB4IV

Catherine Tate on set for Doctor Who in Bristol #dwsr pic.twitter.com/dPkMMnPRix

Doctor Who filming continued in on Broad Street Bristol on 16 June with scene set in the 1920s.

In a partnership between BBC Studios and Bad Wolf studios, Russell T Davies will write and produce Doctor Who 60th anniversary content for autumn of 2023, and series beyond.