Doctor Who film crews recorded several Series 13 scenes in April, most recently with Jodie Whittaker near the Welsh Government Offices in Cardiff on Saturday, April 24.

Two actors made up as aliens in elaborate costumes and an actor in a red shirt can be spotted in the photos filming with Jodie Whittaker.

Whittaker had some fun with crew members while they enjoyed frozen treats. 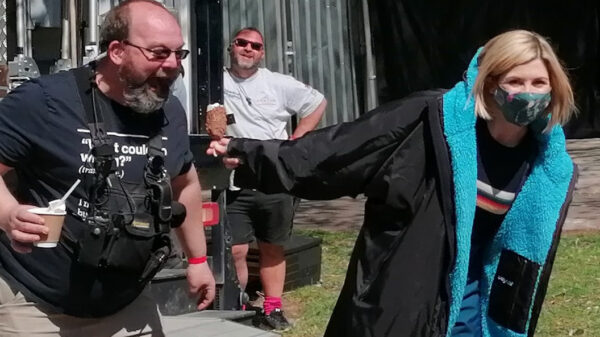 Mandip Gill was spotted outside Roath Lock Studios on April 6. Beyond this one sighting, not much is known about filming from April 1 to April 13. It’s possible the cast and film crew were taking a break from principal photography following Easter. John Bishop returned to work on April 14. 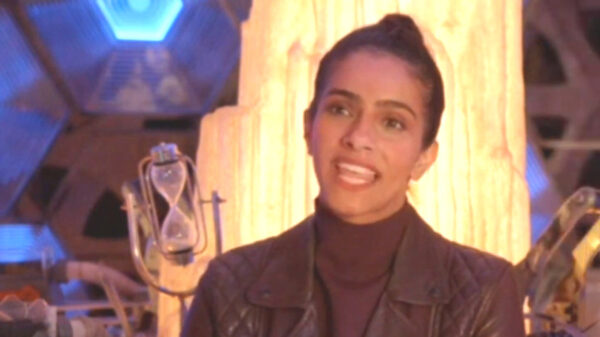 On April 16, a photo was posted of Jodie Whittaker posing on set with a miniature version of the filming slate given to her as a gift. A special effects shot for Series 13, Episode 6 was filmed at Roath Lock Studios on April 16.

On April 19, the Doctor Who crew filmed at the Neath Abbey ruins in Wales. Along with some personal speculation, an eyewitness mentioned “crystal things drilled into the floor,” a “shot of the sky at night” and “lights and mirrors.” The Abbey ruins have been used many times for Doctor Who filming.

That’s the account of production this far into April. Look for more Series 13 filming news from CultBox as production progresses.