WE ADVISE NOT READING THIS REVIEW UNTIL YOU’VE SEEN THE MOVIE AS IT CONTAINS PLOT SPOILERS.

Over the course of six movies, Steve Rogers has transformed from a scrawny New Yorker with ambitions to join the army into the world-famous captain of the Avengers, and his meteoric rise in universe has been mirrored by his equally rapid rise in popularity as a character.

Debuting in the modestly received Captain America: The First Avenger, Cap’s graduated from clichéd chiselled-jaw hero to a widespread fan favourite, so it’s fitting that his solo trilogy should culminate in one of Marvel’s most significant movies yet, packed to the gills with familiar Marvel faces to supplement the captain.

The Russo brothers were handed a gargantuan dual task of living up to the excellent Winter Soldier and juggling a massive cast while keeping Cap front and centre, so it’s extremely impressive they’ve more or less accomplished both of those with Civil War.

The central story here, inspired by the comics storyline of the same name, focuses around movements to hold the Avengers more accountable for their actions through the Sokovia Accords, an international agreement that proposes to limit the Avengers’ power by giving the United Nations oversight and control over their operations.

It’s a surprisingly political concept for a family-friendly superhero movie, but Civil War makes sure to place character above politics – here, the minutiae of the Accords matters much less than how the vast roster of superheroes perceive them, which forms the real dramatic meat of the movie. 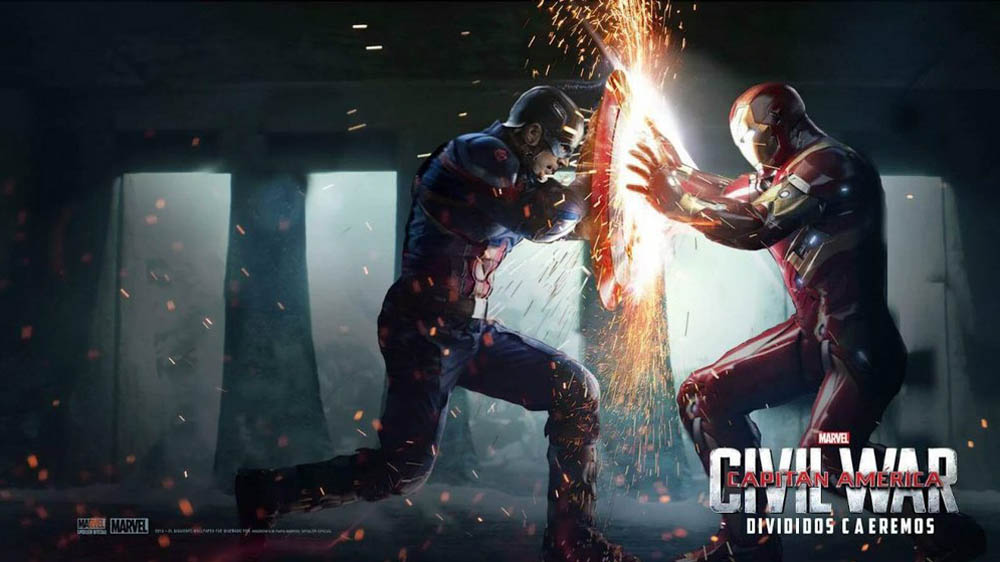 The clash of ideologies between Captain America and Iron Man is genuinely compelling well before the fists start flying because it’s a conflict that incisively reveals what makes these characters tick, and how past events have influenced them.

The first point is important, but it’s the influence of past events that really gives Civil War’s political conflict an extra kick. Importantly, both Cap and Tony’s positions on the issue of the Accords both stem directly from their development and transformation over the past movies they’ve been in.

It would be easy to cast patriot Captain America as the flag-waver for oversight and accountability and rogue Iron Man as the guy who doesn’t take orders well, and it’s true to say that those are the positions the characters may have taken if this conflict had happened, say, just after The Avengers. Yet Civil War smartly builds upon the sea changes in the lives of Steve and Tony since then and takes on board how it’s affected them, which means their conflict acts as the culmination of six movies’ worth of character development that’s genuinely transformed the characters.

Cinematic universes have become wearisome in the wake of the horde of dime a dozen attempts to capture the same success as The Avengers, but their long-form structure allows for the kinds of narratives that could never be played out in a standard, linear series – and Civil War capitalises on that opportunity with aplomb.

Ultimately, the central Steve vs. Tony dynamic works so well because it takes all of the experiences these two men have had and channels it into an ideological conflict in which both parties have very legitimate points – drawing upon all the previous movies in the MCU, this is a conflict that’s more compelling and emotionally resonant than any hero vs. villain fight this universe has served up.

The idea of the Accords lends itself naturally to the central theme of power and how it can, or should be controlled, and it’s this central theme that allows Civil War to pull off the delicate balancing act of giving all of its heroes enough screen-time to be satisfying while making sure they don’t steal the spotlight. 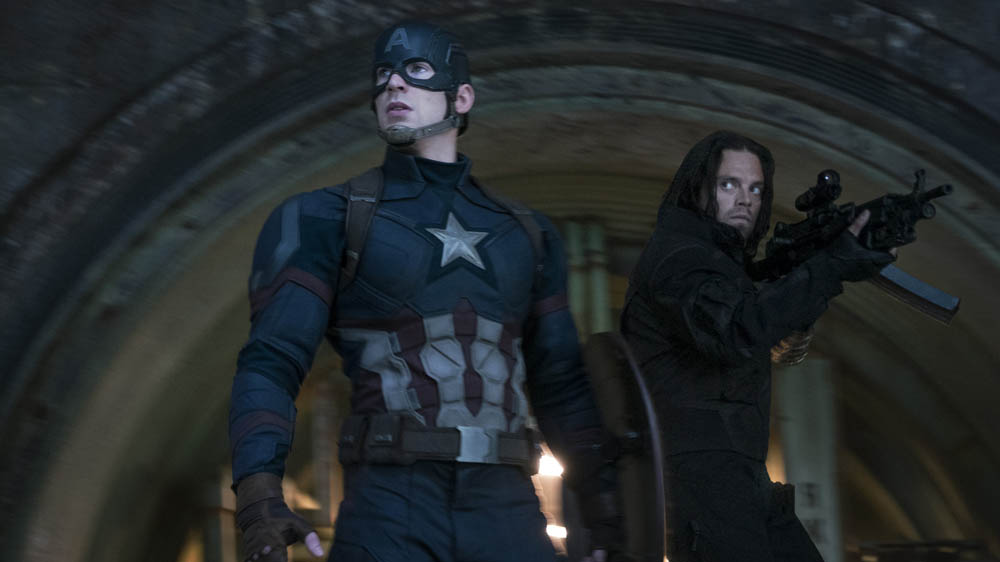 Every character here is relevant to that central theme, and each gets a substantial arc that adds to the overall exploration of power and accountability; aside from perhaps Hawkeye, everyone here feels like they have a role that genuinely adds something.

Every Avenger gets their dues with a satisfying amount of screen-time and each of their positions on Team Cap or Team Iron Man is justified by their character development, yet their stories are secondary enough that they supplement rather than overshadow the central narratives of Cap vs. Iron Man and Zemo.

The Russo brothers’ accomplishment of balancing these characters’ roles while keeping them thematically relevant is an impressive one, and it certainly bodes well for their even tougher task with the two-part Avengers: Infinity War movies and their inevitably colossal casts. 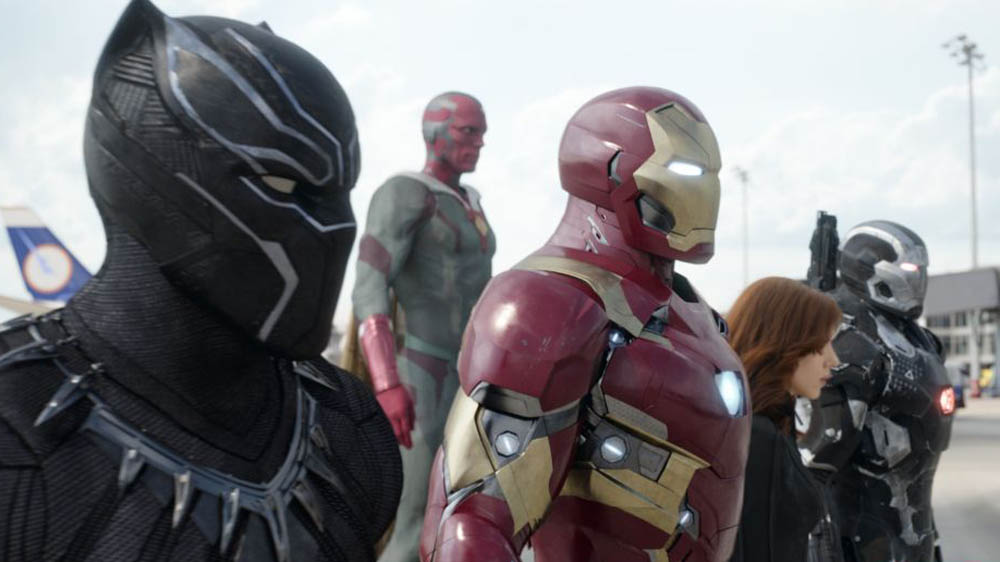 The new arrivals making their MCU debuts here, Spider-Man and Black Panther, also acquaint themselves impressively. A lot was riding on the introduction of the new Spider-Man here, and I’m glad to say as a huge fan of the character that Civil War aces it

It’s a fantastic depiction that captures the essence of the character with relatively little screen-time, from the heartfelt little speech Peter gives about using his powers proportionally (given that Spidey is essentially just fan-pleasing comic relief, he still serves a thematic purpose) to the barrage of quips that Spider-Man lets out in the airport fight.

Tom Holland is terrific fun as Spidey, delivering an endearingly enthusiastic performance as a fledging superhero surrounded by all of his idols. For all the cynicism about a third reboot of Spider-Man in as many years, he finally seems to be in the hands of a creative team who really understand the character, and I’m now genuinely excited to see where this incarnation goes in his 2017 solo movie, Homecoming.

Likewise, Black Panther proves to be an excellent addition. Chadwick Boseman imbues regal dignity into T’Challa with a performance that demonstrates enough leading man gravitas to convincingly whet appetites for his solo movie in 2018, and the character’s fighting style and impressive design means that his fight scenes are some of the most kinetically thrilling of the film. 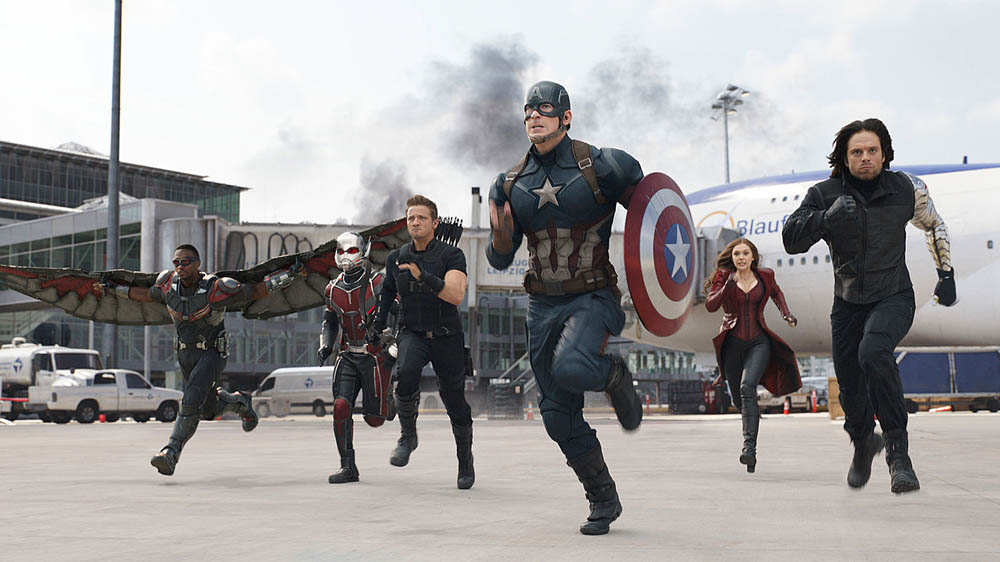 It’d be remiss if I didn’t mention Civil War’s signature scene, the extended airport fight between Team Cap and Team Iron Man. It’s an utterly joyous action scene that delivers a dizzyingly exciting amount of superhero match-ups with a clear sense of fun that’s evident in the truckload of jokes and memorable visuals that are served up at an impressively rapid rate.

After the gritty politics of the first two acts, it’s a chance for the film to let loose, delivering unapologetically bonkers spectacle such as the first appearance of Giant Man (Paul Rudd is as reliably hilarious as ever as the comic relief, getting some of the movie’s best one liners).

The genre has come a long way from the early days of plain black costumes and a lack of codenames, and the airport scene serves as a reminder of how lucky we are to have such a widespread collection of superheroes all sharing the big screen portrayed by filmmakers with a genuine love and understanding of these characters.

The third act has often been a sore spot for Marvel as it’s the part where focused and distinctive narratives have been squeezed into the same, slightly generic template of a big final battle with lots of explosions and something falling from the sky.

That’s not the case here, and it’s to be congratulated that Civil War remains entirely focused on its characters right up until the end, never losing its grip of the personal in pursuit of spectacle. The final battle is the most emotionally bruising Marvel’s delivered thus far because it’s centred around the innately tragic battle between two friends who are now guided only by rage and vengeance genuinely trying to kill each other.

It’s a gripping battle that’s motivated by raw emotion as opposed to a mechanical need to save the world, so there’s weight behind every punch thrown as the two men are battling over an entirely personal vendetta.

Some may wish the movie would have gone even further and killed off one of the characters, but Civil War nonetheless massively shakes up the dynamics of the Marvel universe with this final fight, and there’s genuine impact in seeing Cap drop his shield in shame at the feet of a defeated, despairing Iron Man. 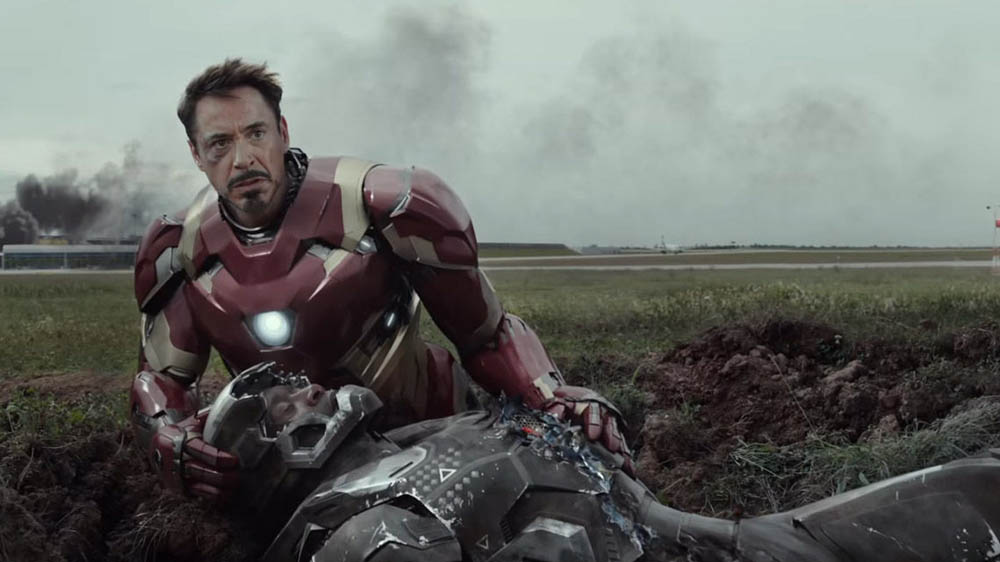 There’s parts of Civil War that don’t quite pass muster. Zemo’s story is certainly the weak link – not because of Daniel Bruhl, who delivers a quietly sinister performance with very little theatrics, and not necessarily because of Zemo’s characterisation, which is refreshingly simple and adds to the thematic exploration of the Avengers’ destructive impact, but more because of what Zemo’s presence brings along with him.

The mythology of the multiple Winter Soldiers is excessively convoluted, adding an unnecessary layer of complicated machinations that just serve to disrupt the coherence of the battle between Cap and Iron Man. It gets the two men to fight each other at the end, so it serves its purpose, but the story of the multiple Winter Soldiers feels like the movie is biting off more than it can chew, which only draws attention to the missed potential of a plotline that Civil War doesn’t have any time to satisfyingly do justice to.

It’s because of this that the movie feels, every now and then, a little overstuffed – so densely packed with mythologies and agendas that some of the nuances of the character arcs struggle to breathe. To Civil War’s credit, it handles its heavy load effectively throughout, but it would have been preferable if the movie was just a little more streamlined.

It mixes the compelling political grit of The Winter Soldier with the joyful fun of the first Avengers, doing justice to its vast roster of characters while never losing sight of its central conflict. It’s a thoroughly confident start to Phase 3 that bodes well both for the solo movies that will spin off from this and the Infinity War two-parter for which the creative team of directors and writers will return, proving that Marvel are still hitting new heights in their cinematic venture eight years in.