The Eleven sees Mark Bonnar’s multifaceted Time Lord villain granted his own boxset, pitched against another Doctor. He has met the Eighth in Doom Coalition and Ravenous, plus the Seventh for Dark Universe; on this occasion, presumably earlier in both their timelines, he encounters Colin Baker’s bombastic Sixth Doctor. 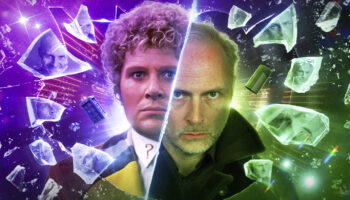 An abandoned TARDIS in the vortex puts the Doctor and his companion Mrs Constance Clarke on the Eleven’s trail. Slaving the apparently abandoned vessel to his own, the Doctor heads for its last destination: Molaruss.

One for All introduces us to a unique society, where most of the inhabitants naturally have co-existing dual personalities. Lizzie Hopley’s script sets the groundwork for the trilogy, showcasing Miskavel, the Eleven’s new paramour. At the Duotech treatment centre, the Doctor and Constance find her posing as an aggrieved widow whose husband has apparently died during a treatment.

As the Doctor investigates, we rediscover the complex set of individuals that make up the Eleven. Add in some cloning and Miskavel, with plans of her own, there is a lot going on here!

Nigel Fairs pens the second part, The Murder of Oliver Akkron, a cleverly constructed series of two-handers. With the Doctor and Constance absent throughout, he focusses on events on Molaruss. First a scientist and her assistant, then Eleven and celebrated businessman Oliver Akkron – the current World President of Molaruss.

Fascinatingly, the Eleven has become a sort of celebrity himself, apparently suppressing his other personalities and taking holy orders. This part of the story plays out as more of a how than a whodunnit; working towards the promise of the title, it carefully teases out the past and is a cleverly constructed murder mystery.

As the eponymous Akkron, Simon Slater gives a layered performance as he is charmed and drawn in by Mark Bonnar’s self-depreciating villainy.

Finally, the Doctor and Constance return for the finale, where they find the Eleven installed as World President. Popular and successfully, he rules Molaruss with Miskavel at his side as First Consort. Apparently, in the land of the dual-minded, the eleven headed god is king.

The trouble is that the Eleven is far too easily bored… which brings on a scheme worthy of the Master. Indeed, we saw parallels with the Immortality Gate from The End of Time, although this gizmo is rather more complex and cleverly set up earlier in the boxset. Elevation has the tone of an RTD season finale, epic in scale but told through its personal implications.

The Eleven is another well-polished production but we cannot help but feel a little disappointed; we hoped it might develop the titular character further but instead just deploys his established box of tricks. Don’t get us wrong, Mark Bonnar’s performance remains extraordinary, but more than five years since his debut, we were looking for some greater insight into the character. For us, placing him on a world of dual personalities and granting his unique gift to others lessens his impact. That said, when Constance encounters multiple aspects of her character it is both hilarious and touching – a credit to both Miranda Raison’s performance and Chris Chapman’s script.

As the Doctor, Colin Baker is on his usual sparkling form, and his interactions with Mark Bonnar are great fun. It is always good to hear old Sixie taking a moral stand and fighting the good fight, even if the guest villains grab the lion’s share of the action.

Where this boxset does excel is with the creation of Miskavel, Eleven’s partner in crime, and Lucy Gaskell (Blink’s Kathy Nightingale) is excellent throughout. We are never truly quite sure whose side she is on, save for her own. It also provides an amusing element of meta-casting, as the actress is married to Mark Bonnar in real life.

It is fun to have the Eleven interact with other Doctors and indeed, have earlier (and later) incarnations of the character turn up too. However, they need to have a goal, over and above his multiple personalities quirk, to make the stories compelling. While this trilogy is diverting enough, we are not sure it hits the heights of previous encounters. Perhaps there are diminishing returns with the character?

Doctor Who – The Sixth Doctor Adventures: The Eleven is available on CD and download from Big Finish.