The director of the Doctor Who New Year’s special, Wayne Yip told Doctor Who Magazine that the the special, titled Resolution, will be a “blockbuster”.

“I hope that new fans have a great time because it’s such a popcorn, blockbuster version of Doctor Who.”

And, according to the magazine, “an ambitious opening sequence sets the tone for the episode.”

Mandip Gill told TV Choice magazine of some action in the special.

“There’s a car chase and explosion ‒ it’s bigger than the other episodes!”

Charlotte Ritchie and Nikesh Patel play love interests Lin and Mitch in Resolution. According to Doctor Who Magazine, Lin and Mitch “find their worlds turned upside down by the arrival of the Doctor and her friends.” 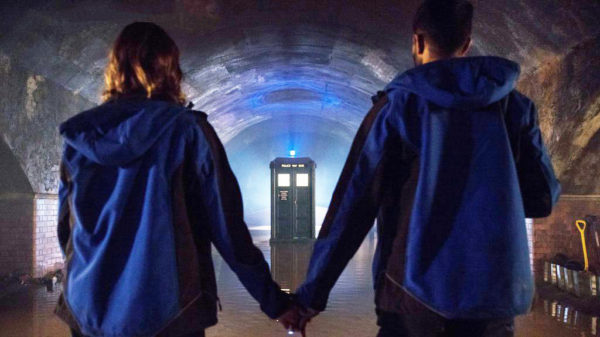 Nikesh Patel in Doctor Who Magazine:

“The script read like a really tense thriller, with elements of horror.”
“This felt like a psychological thriller in some ways, and that was on the page when we got into it.”

Charlotte Ritchie in Doctor Who Magazine:

“It’s quite far out of my comfort zone. I’ve never done anything that’s been action-oriented…”

But is it really a “blockbuster”?

Since 2015, three Doctor Who Christmas specials were shown in select American and Canadian cinemas. The Husbands of River Song, The Return of Doctor Mysterio and Twice Upon a Time were shown in North American cinemas days after they aired on television, as was the Series 11 premiere episode of Doctor Who, The Woman Who Fell to Earth.

As it stands now, there is no announced intention from the organizer of theses cinema showings, Fathom Events, to show Resolution in North American cinemas. Though the special airs on television on New Year’s Day and not Christmas day like the other Doctor Who holiday specials, this remains a notable departure from what Fathom Events have done in the past.

Time will tell whether Resolution lives up to the hype.