In Doctor Who Magazine 578, Russell T Davies promised readers of the magazine that he would resume writing the Production Notes column.

His stated plan is to resume the Production Notes column “later this year” but in a article he wrote in the Gallifrey Guardian section of the magazine, he described his grand plan for the reveal of Ncuti Gatwa as the new Doctor on Sunday, 8 May.

“Then an official statement at 12:30am, released to the press. And then, hold on, wait, wait, nice and quiet, let people think that’s all. My mate Stefan texted me, always ready with a complaint. ‘Bit low-key,’ he said. ‘Oh, you wait,’ I thought, as we hit 13:30 and… Flash, bang, pop, scream, the new Doctor walked into the biggest red carpet in the world!”

Davies is referring to the red carpet at the British Academy Film Awards, the BAFTAs, scheduled for that evening.

“That was quite a sight, camera crews and microphones and journalists in the blazing sun yelling ‘Ncuti! Ncuti!’ Members of the public being held back by security, leaning over balustrades to shout, “Doctor!’ Wonderful. What a coup.”

Jodie Whittaker is leaving the role of the Doctor during the Doctor Who BBC centenary special in October of 2022.

David Tennant will be back in the role as part of the Doctor Who 60th anniversary celebrations in 2023.

Gatwa is expected to debut as the new Doctor sometime in 2023. 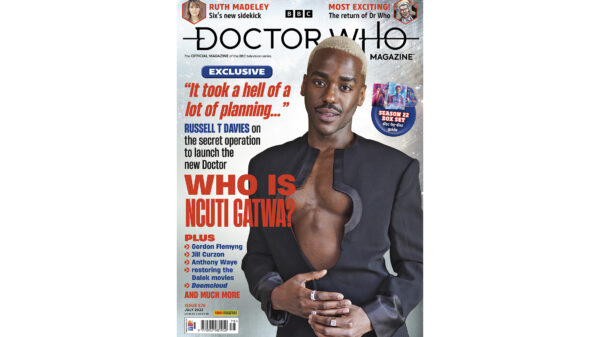 Doctor Who Magazine 578 is available by digital issue and will hit newsstands in the UK on 26 May.