Sarah Phelps’ dramatisation of the notorious Duke and Duchess of Argyll divorce begins on Boxing Day.

As we creep towards Christmas, trailers are beginning to emerge for some of the festive highlights. Starring Claire Foy (The Crown) and Paul Bettany (Marvel’s Vision), A Very British Scandal tells the story of an incredibly high-profile divorce across three hour-long epsiodes.

Written by Sarah Phelps, who’s been behind a number of recent Agatha Christie adaptations for the BBC, the series serves as a sort-of format sequel to Russell T Davies tremendous A Very English Scandal. That told the remarkable story behind Liberal Party leader Jeremy Thorpe’s fall from grace. This time, it’s the Duke and Duchess of Argyll, whose split is called “one of the most notorious, extraordinary, and brutal legal cases of the 20th century.” 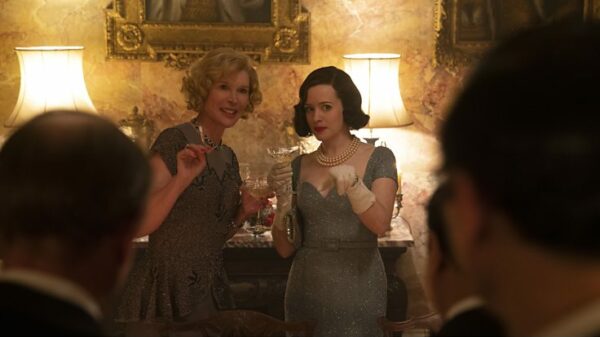 We brought you some first-look pictures, as well as the synopsis, back in October. Here, set to a strained version of Joy Division’s Love Will Tear Us Apart, the trailer gives a real sense of the story.

In addition to all the glamour and sex, there’s also a steam train. Something for everyone then.

A Very British Scandal lands on BBC One at 9PM on Boxing Day, will with the whole series available to stream on iPlayer. For those who prefer to keep it linear, subsequent episodes will appear at 9PM on 27th and 28th December too.

Naturally, we’re wondering where this format goes next… is there a very Irish scandal waiting to be told? CultBox will keep you posted.