Dalek Universe 1 draws David Tennant’s Tenth Doctor back to a time before the Time War. Without his TARDIS, he hooks up with the Space Security Service, in the first of three boxsets which comprise the Dalek Universe series. 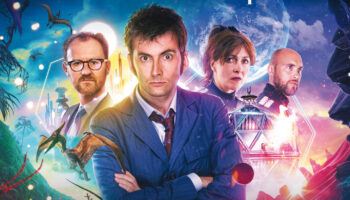 Abducted by an unknown force, the Doctor finds himself in need of allies. Enter SSS Agents Anya Kingdom (Jane Slavin) and Mark Seven (Joe Sims), both of whom who have encountered the Time Lord before, albeit in an earlier incarnation. Surviving their first encounter on an alien planet, the trio soon head for Earth; all roads lead to the launch of Sheldrake Industries’ commercial time tunnels which the Doctor is sure must be stopped!

From invisible monsters to corporate temporal shenanigans, John Dorney’s two-parter introduces a universe peppered with Terry Nation inspired concepts. Events here sit on the shoulders of The Syndicate Master Plan season, plus the Dalek Universe prequel The Dalek Protocol. However, it is all background colour and previous knowledge, rather than essential listening. All the important action, and there is plenty of it, happens in the now. 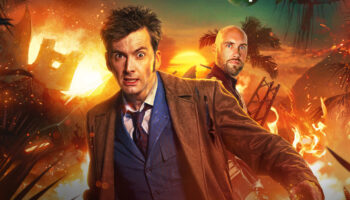 To be honest, the plans for commercial time travel and its launch play second fiddle to the characters here. We have heard, or seen, the idea of ‘all of time happening at once’ before. Here, at least, it is delivered in some detail though, allowing Mark Seven to demonstrate his worth.

Across the two parts, the story provides some reflective moments for the Doctor, but primarily showcases his new friends. Gemma Whelan (Game of Thrones, Upstart Crow) joins the ensemble for The Wrong Woman and, frankly, she is a riot! 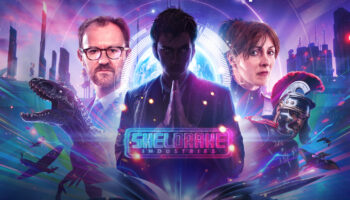 In the villainous role of George Sheldrake, Mark Gatiss entertains but felt underused. Possibly Sheldrake will return – if not, it seems starry casting for what amounts to a minor role. Also in the guest cast is Juliet Aubrey, perhaps best known for Primeval, who plays the out-of-her-depth Commander Malkin.

The House of Kingdom

With the Doctor stranded, he and his allies go in search of the creator of this era’s time travel technology. Caught up in a suspicious space pirate attack, they are rescued by Merrick Kingdom – Anya’s estranged grandfather. A former SSS research head-honcho, Merrick has retired to Neptune to supervise a Mechonoid terraforming operation.

As the title suggests, writer Andrew Smith’s tale focusses on Kingdom Family history, granting Jane Slavin an opportunity to dig into her character. In addition to plenty of Mechanoid action, and a clever plot, we learn how Anya connects to the late Sara and her brother Bret Vyon, and why she holds so much disdain for Merrick. 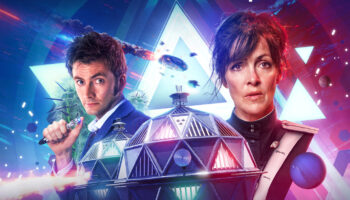 If the Mechonoids were clumsy on screen, they are no less troublesome on audio. On this occasion however, they are deftly employed as a faceless threat, unquestioningly carrying out destructive orders.

Kevin McNally is excellent as Merrick Kingdom, hot off the heels of his recent turn as Vakrass the Death Lord in The End of the Beginning. There is also a hard-headed turn from Maria-Teresa Creasey as Dr Abigail Crane, best known to BF fans as Dr Helena Russell in their reimagining of Space: 1999.

Despite its title, the Daleks are notably absent from this boxset, other than in a passing cameo. Instead, we get a slice of the universe around them, inspired by the works of their (real world) creator; Mechanoids and SSS agents hail from the action-oriented adventures the Doctor enjoyed when Terry Nation wrote the stories. Interestingly, it is a setting that suits the Tenth Doctor well – both on a nostalgic level and also allowing him to play the action hero too.

As companions, Mark Seven and Anya Kingdom make a well-matched pair; he is the super-skilled android agent, while she is sarcastic and desperate to redeem herself in the Doctor’s eyes. We look forward to hearing them develop – certainly the cliffhanger ending of this set promises to let us learn some more about Mark Seven!

It is almost a moot point to mention that this whole series has been recorded in lockdown, with Big Finish having repeatedly proved themselves more than capable despite the recording restrictions. As ever, this boxset enjoys their usual high standards of production, with absorbing music and sound design from Howard Carter and pacy direction from Ken Bentley.

As the entry point into this series Dalek Universe 1 sets up plenty of interesting possibilities. It also offers David Tennant a longer run at playing the Doctor once again, developing the character post-Series 4. With the covers for volumes 2 and 3 revealed, we know we can expect plenty of Daleks, as well as Davros and an appearance from River Song dressed as a Movellan – the mind boggles!

Doctor Who – Dalek Universe 1 is available on download, CD and Vinyl from Big Finish.